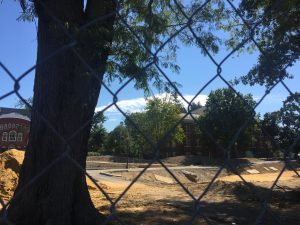 The construction activities ongoing outside of Sanders Classrooms and the Sanders Chemistry building will continue as part of an ongoing landscaping project throughout campus. Photo courtesy of Emily Hwu

As students meander across campus between clubs and classes, they are met by the per­sistent hustle and bustle of the construction site where Mudd Chemistry used to stand. They pause at the end of the sidewalk to let a bulldoz­er pass them on the street and continue on their way, glancing over at the tireless workers, piles of dirt and gaping pit with a bit of intrigue. Con­struction presents itself as a kind of nuisance, breaking the generally peaceful atmosphere of Vassar’s campus and creating obstacles on students’ and staffs’ normal routes. Maybe peo­ple are simply naive, or just uninformed, but it seems as if most have absolutely no clue what is going on with all of the construction at Vassar. What’s changing now, and what will become of Vassar’s campus and buildings in the future?

Bryan P. Corrigan, a project manager for Vas­sar, is integral to the planning and building pro­cesses that result in construction and change on campus. Corrigan has been working at Vas­sar since 2005 and his job is to coordinate any capital projects and renovation projects from origination to design—serving as the conduit be­tween the construction project and the campus. Corrigan was not only able to provide insight to the future of Vassar’s campus, but also to the layers and complications of these construction projects that are not initially apparent.

The plot where Mudd Chemistry used to be— the one that now has the giant pit—is simply a landscaping project. It is part of a campus-wide landscape master plan to help guide the college in a more unified direction; in essence, work is being done to integrate buildings into the land­scape around them. As for the construction work near Swift, that is merely a matter of fixing infrastructure and sidewalks.

So, not too much is happening now, but what can students and staff expect to change in the near future? According to Corrigan, the College is currently reviewing the elements of a new master plan study that will guide construction on campus for the next 10 to 15 years. This mas­ter plan will likely be finalized within the next year but, while no plans are finalized at this time, Main Building is undoubtedly the main objec­tive. The interior will be completely redone and reorganized; last school year, open town-hall like meetings were held to gauge students’ sugges­tions on opinions on what is important to have in Main, and the information collected is being analyzed and taken into consideration.

Corrigan noted that the tricky part of figuring out how to completely renovate the interior of the building is strategizing how to do so with­out completely disrupting the staff and students. This process is more complicated than most students would probably assume. For instance, where would all 300+ students who make their home in Main live during renovations? When Davison was renovated back in the 2008-2009 school year, swing space could barely be found for all 150 students, much less than the much higher number of students in Main. Similarly, space would need to be sought out for key ad­ministrators whose offices are in Main. A solu­tion could be to do the renovation in stages, but that would extend the cost and timeline of the project, overlapping with some students’ entire Vassar experience.

But, as Corrigan points out, “Construction by itself is disruptive, there’s no way around it. It’s simply impossible to not be disruptive.” Essen­tially, although the primary goal is to renovate Main, there are a lot of small pieces that still need to be considered and sorted before designs for a renovation of Main can even begin, which means that at least another three to five years before any noticeable changes can be expected.

Corrigan stated that many new construction, renovation and restoration projects are planned for the next few years. He says that he and his team recognize that Blodgett–with its infamous­ly perplexing staircases and circuitous hallways– is in need of attention, as is Walker Field House and many residential houses, including Ray­mond. However, the basic issue is that there are a lot of projects but limited funds, so it’s a matter of making do with what spaces and resources are available. Regardless, there is a great awareness of what needs to be fixed, and goals to improve all of the aforementioned facilities.

Corrigan predicts that, no matter how far into the future one looks, Vassar College will look essentially the same from the exterior. In addi­tion, there is a great, campus-wide awareness of the importance of its older structures, and the impact that their histories have on its students and staff. Main Building and the Mariah Mitchell Observatory are even listed on the National His­toric Registrar. While the historical frameworks of buildings will likely remain, the interiors will continue to be renovated, renewed and mod­ernized, as Sanders Physics and New England recently were. In addition, as the school has no plans of expanding the student population, there are no plans for new buildings, which would cre­ate unnecessary, extra square-footage.

Essentially, each large-scale construction project takes an extensive amount of time for planning before execution; plans for the Bridge Building began a whopping 10 years before its completion. Thus, although students cannot expect any monumental changes in the next few years at Vassar, there are still workers who are constantly renovating, renewing and fixing tiny components of Vassar’s campus. It is an ever-changing place that evolves and progress­es piece by piece, so slightly that people often don’t stop to notice. In addition, there are teams of people constantly planning and coordinating Vassar’s next steps, with the goal of making the campus a better place for everyone.