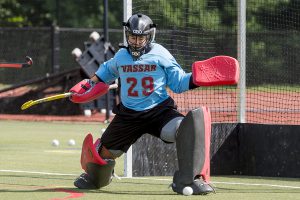 What do the top three leading scorers, the leader in assists and the leader in saves on the women’s field hockey team all have in common? They are members of Vassar’s Class of 2019.

For head coach Michael Warari, his 10 re­turning sophomores have been a huge part of this season’s success. The field hockey team currently sits with a record of 8-1, with its most recent non-conference win last Wednesday coming against No. 10-ranked Montclair State University on the road.

In that matchup with the Red Hawks, sopho­more Megan Caveny found senior Hayley Beach in the fourth minute to give the Brewers a 1-0 ad­vantage. With strong team defense, Vassar was able to hold on to the shutout and walk off its home turf with an upset victory.

“Our class of 10 came in at a great time, there has been so much hard work put in by the class­es before us to help get to the success that we have seen,” said Caveny, who is tied for the team lead in goals at five and is the leader in points with 15. “We are also an extremely close group which leads to great chemistry on the field.”

Caveny is the reigning Liberty League Rookie of The Year, and said that her transition from last year to this year has been a smooth one.

“Winning the Rookie of the Year definitely puts a target on your back and more pressure to perform,” Caveny said. “But I like to think that I am capable of rising to the challenge and up­holding that honor this season.”

Caveny is not the only sophomore that has stepped up on offense this year. Alyssa More is currently tied with Caveny for the lead in goals at five, and is second in points with 13.

“I believe the biggest difference in this season from the last is experience. The transition from high school and club to college field hockey is a huge one, so there definitely is a learning curve,” More said. “Now, with one year under our belts, we’re far more equipped to take on the speed and high level that the college game demands.”

In More’s best game the season, she scored the game winner against Western Connecticut State on the road on Sept. 14. More also scored two more goals in the first period, guiding the Brewers to a 6-0 victory.

“When they came in as freshmen, they dou­bled the team in size, which was exciting for the program,” senior captain Sophie Arnold said. “Each of them contributes in such positive ways and brings so much fun to our team.”

Other Brewer wins include 1-0 and 2-0 vic­tories over SUNY Geneseo and Smith College respectively in the Betty Richey Tournament at Weinberg Field. Vassar captured the Betty Richey championship for the third year in a row. Defender Monica Feeley, also a sophomore, was awarded the tournament MVP award.

“It’s great to know that my sophomore class is a large part of the team’s success,” Feeley said. “I think it motivates everyone to work as hard as they can on the field. It’s great knowing that I am going to be playing with an amazing group of girls here for all my four years.”

Although as a defender Feeley will not show up in the stat books, she has quarterbacked the Brewer defense with aggressive pressure, forc­ing turnovers by opposing teams.

“I think my success stems from a team effort,” Feeley said. “Field hockey is not an individual sport; it takes an entire team to win a game. I go out on the field and try to perform the best for my teammates so that we successfully advance in the season as a cohesive unit.”

Feeley, however, has not been the only soph­omore to step up on defense. Molly Youse and Haley Cubell have also contributed, along with Paige Amico, who has started all nine games in goal for the Brewers.

“This season we are expecting to make a big presence in the Liberty League,” Amico said. “We caused a few big upsets last year which gave us momentum coming into this season. Over the next two years I am confident that we can dominate the Liberty League.”

Amico currently holds 26 saves on the sea­son and has only surrendered two goals, both coming in the Brewer’s sole loss of the season against a talented Kean University team 1-2 at home on Sept. 7. Amico’s eight other games were all shut-out victories.

“Being competitive as a young team also shows a lot of promise for the years to come,” Amico said. “The confidence that each of us share has been critical in our past and current success as a team.”

The team’s success has turned into an ac­tive six-game winning streak, with victories over The College at Brockport (9-0), Western Connecticut State (6-0), Ramapo College (6- 0), William Patterson University (6-0), No. 10 Montclair State University (1-0) and the Liberty League opener on against St. Lawrence Univer­sity (3-0).

The Brewers’ offensive strength has also been aided by sophomores Gracie Tavakkol and Mikyla Young. Tavakkol never reached the back of the goal last season, but has already proven her strength with four goals and nine points. Young has also improved on her freshman year season of two goals and five points with three goals and eight points so far this year.

“The team unity and chemistry of the soph­omore class is unparalleled. We are more than teammates to each other; our relationships go so much deeper than on the field. I am so honored to be part of a group of ten amazing, unique, in­spired women,” More articulated.

The team will next play Hartwick College at home on Wednesday, Sept. 28 at 4:00 p.m.