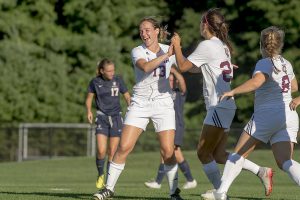 Brewer women’s soccer went down 1-0 versus Montclair State University away at MSU Soccer Park on Wednesday afternoon. The Brewers fell behind after a 35th-minute goal that would ul­timately prove the difference in the contest, as the VC squad was unable to find an equalizer despite a preponderance of shots.

Senior goalkeeper Stephanie Tapolsky made four stops against the Redhawks, while fresh­man Savannah Cutler, who scored in the Brew­ers’ previous matchup with Oneonta, had two shots-on-goal to lead the team.

Vassar put an end to their run of frustrating results on Saturday with an emphatic 7-1 win over visiting Skidmore College. Freshman mid­fielder Gabrielle Deitch scored her first colle­giate goal with 20 minutes gone, while shots from six others found the back of the net as well.

Vassar next hosts Clarkson University on Friday afternoon at Gordon Field, with kickoff slated for 4 p.m.

The Brewers had a perfect weekend of Lib­erty League play, beating Bard, RIT, Skidmore College and Union College, all in straight sets.

The Brewers will next host Hunter College Thursday evening in Kenyon Hall at 7 p.m. 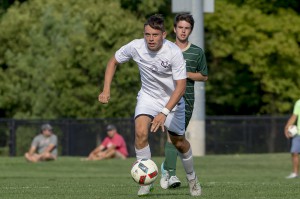 Junior defender Tanner Sands goes for a ball during a game against Skidmore College. The Brewers tied the Thoroughbreds 1-1 in the team’s Liberty League opener on Saturday, Sept. 24. Photo courtesy of Carlisle Stockton

Freshman Mattie Mrlik again got himself on the scoring sheet, knocking in the equalizer from a throw in by junior Hayden Van Brewer in the 82nd minute of play. Mrlik’s goal came 20 minutes after Skidmore opened the scoring.

The Brewers had many more chances, taking 21 shots to Skidmore’s 10 overall, including three in the second period of overtime, but couldn’t find a goal a second time. Junior goalkeeper Matt Marcelino recorded two stops during his extended shift in net.

Vassar stays on the road for two more Liberty League games, at Clarkson University on Friday and at St. Lawrence University on Saturday. The Brewers will host their first home League con­test against Rensselaer Polytechnic Institute on Saturday, Oct. 8.

In their third conference game of the year, played at Drew University in New Jersey, Vassar jumped out to a 19-0 lead after 15 minutes and didn’t look back.

Both teams scored once more in the first half and going into the intermission Vassar led 24- 5. Vassar, despite some defensive lapses, would keep knocking and piled it on in the second half, eventually beating Drew 57-19.

Senior Joe Simon had himself a day, recording four tries. Juniors Nick Crooks and Dale Lord also helped lead the Brewers to victory by add­ing one try each. Junior Trevor Kennish slotted three cons as well as scoring a try, while sopho­more Stephen Kpundeh had a brace of tries and also knocked through three cons of his own.

The Brewer women took on Hofstra Universi­ty and United States Military Academy over the weekend. Vassar jumped ahead with two early scores to lead 10-0 and went into halftime with a 15-7 edge over Army, thanks to three Brewer tries. The Brewers would tack on 31 more points in the second period to beat Army’s women’s contingent 46 to 7.

Senior Lauren Workman recorded a brace, while her teammates fellow seniors Natha­lie Freeman and Laila Blumenthal-Rothchild each added a try of their own. Juniors Alicia Menard-Livingston and Amanda Saich both scored once as well, and sophomore Rachel El­son had a brace to her name. Senior Mary Mar­garet McElduff was good on three of her conver­sion attempts for the day.

Vassar next pitted its B-side against Hofstra, in a matchup which ended in a overwhelming defeat. The Brewers would record an 84-0 shut­out over the hosts.

Rookies Charlotte Benoit and Caroline James both scored, while sophomore Jennie To record­ed the hat trick. Gabby Caballero also scored a try on the day. McElduff slotted three cons and added a try against Hofstra as well.

Women’s rugby next hosts Marist at the Vas­sar Farm on Sunday morning at 11 a.m.

On Saturday, Vassar started the day with a sweeping victory over Union 9-0. Freshman Allen Sokolov and sophomore Jamie Anderson saw off Ian Bank and Zach Kaplan 8-1 at No. 2 doubles, seniors Juan Felipe Laso and Alexander Luckmann took out Justin Golf and Del Schunk 8-5 at No. 3 dubs, while freshman Dom Deme­terfi and senior Nick Litsky ground out a win against David Bond and Max McGeown 9-8 at No. 1 to sweep doubles.

After much success, the Brewers traveled home to then finish the day against League competitor Bard College. Against Bard, Vassar again swept dubs, with Luckmann and sopho­more Nick Zuczek partnering for an 8-0 win at No. 3 doubles over Nicholas George and Zayd Normand; Laso and Anderson added another 8-0 result at No. 2 doubles, while Litsky and De­meterfi got past Keillor Mose and Satchel Fisher 8-5 at the top doubles spot.

In singles, freshman Zamir Birnbach became the third Brewer to get his first singles win, picking up a 6-0, 6-0 win at No. 6. Anderson would clinch a match of his own with a 6-1, 6-0 victory at No. 4 singles.

Competition in Geneva, NY will wrap up the men’s fall season for 2016. The Brewers will return to the Josselyn tennis courts in 2017 for their spring season.

The Brewer women competed at ITA North­east regionals over the weekend at William Smith College.

Junior Kate Christensen made it through to Sunday in main draw singles, eventually being downed 7-6, 6-2 by Sarah Mensah from The College of Brockport in the quarterfinal round. Christensen also reached the second round of doubles play with sophomore partner Morgane Flournoy, losing a close match 9-7.

Senior Shayna Becker and freshman Tara Ed­wards dropped their first round doubles match on Saturday but found their way to the semifi­nals of the consolation draw, dropping a tight match 9-8 to eventual consolation winners Sra­vya Gudipudi and Camila Garcia of University of Rochester.

Edwards reached the quarters of consolation singles as well, while Becker and fellow senior captain Connie Yoo made it to the second round of main draw singles.

VC Women’s Tennis has a doubleheader on Saturday, playing Bard at home in the morning and Union away in the afternoon in Schenect­ady.

Similar to the men’s team, the women will halt play after their matches against Union and will resume competition in the spring.

Senior forward Hayley Beach’s goal in the fourth minute proved enough to lift VC over No. 10 Montclair State at home at Weinberg Field on Wednesday. The win marked the fifth straight shutout for the Brewers and the fourth victory over a ranked opponent since 2013 for the Vassar field hockey team.

The goal came off a penalty opportunity, as junior Monica Feeley passed to sophomore Me­gan Caveny who one-timed a shot, which Beach deflected into the cage for the eventual deciding goal.

Montclair State outshot the Brewers 10-5 overall but the defense proved up to the task, as sophomore Paige Amico posted her third com­plete shutout of the season, and hasn’t conceded in a 210-minute streak.

The Brewers will take on St. Lawrence Uni­versity Saturday at 3 p.m. in Liberty League action. Field Hockey looks to snap a 33-game conference road losing streak, dating all the way back to 2005.