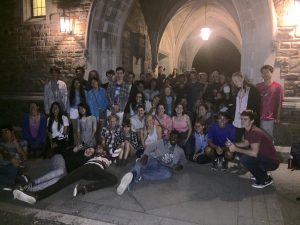 Students gather under Blodgett Arch after a BNI Hide-and-Seek event. The student organization offers a range alcohol-free events for people looking for weekend alternatives. Photo courtesy of Big Night In

Alcohol can play a significant role in the social lives of students at Vassar. However, for those dedicated to Big Night In (BNI), a student group that provides alternative programming and enter­tainment, a leisurely evening with friends focuses on activities besides alcohol consumption.

Ranging from movie screenings and bowling nights to laser tag and apple picking, most BNI events represent the passion projects of dedicat­ed students. BNI Founder Kohei Joshi ’18 reflected, “Three things motivate me in continuing my ef­forts to create a more inclusive, interactive and ac­cessible community on campus. These are simply seeing people have fun and smiling at our events, having a group of extremely enthusiastic and pas­sionate friends who share my vision of creating a community through alternative programming and lastly knowing that we are in the midst of making a lasting meaningful impact at our very own school.”

BNI Member Antonella DeCicci ’20 elaborated, “Students generally attend BNI events to be a part of a community of fellow students who choose not to party every weekend. It creates a fun environ­ment with lots to do and lots of opportunities to meet people and build friendships.” She continued, “As an incoming freshman, the pervasiveness of the drinking culture on campus was a bit shocking. I’m disappointed in how little there is to do in Pough­keepsie and on Vassar’s campus outside of party­ing on the weekends, but I’m happy to have BNI and I loved all the activities put on this weekend by various student groups!” BNI Member Zhuo Biao Cai ’19 agreed, “I am beginning to understand how valuable alternative programming can be to stu­dents who do not party or drink. College is stereo­typically portrayed in TV shows as a place where students party, but there are so many students who are not comfortable with such activities. They also need a place for them to enjoy themselves and it’s important that such a community exists for them.”

BNI and similar groups have been backed by on-campus healthcare providers. Director of Health Services Dr. Irena Balawajder observed, “We support alternate programming. It would provide students with a healthy and safe outlet for stress relief and enjoyment.” Balawajder contin­ued, “Reducing the effects of alcohol abuse would ultimately improve students’ well-being and aca­demic performance as well as serve to reduce the impact on healthcare and community resources.”

Students involved in the events have fond mem­ories of the time they’ve spent together. Zhuo re­counted, “My favorite moment occurred during BNI’s Hide-and-Seek event at Blodgett. We didn’t have many people who wanted to be seekers, so the members became seekers. We all went inside a dark Blodgett with just glowsticks and tried to find as many people as we could.” A crucial aspect of events like this is collaboration between student groups, student government and the Administra­tion. The Blodgett event, for example, was a new idea that required input from building managers as well as the Office of Safety and Security.

BNI’s most recent event involved collaboration with the Vassar Card Sharks. Co-founders Michael Oosterhout ’18, Baian Liu ’18, Clara Berard ’18 and David Deng ’18 wrote in an emailed statement, “We at the Vassar Card Sharks were approached by a friendly admissions officer at this semester’s Ac­tivities Fair, who saw some similarities in mission between our org and Big Night In and introduced us. After discussing some ways to structure a joint event between Card Sharks and BNI, we decided to help host a night of teaching and playing vari­ous card games. Card Sharks and BNI both believe in providing fun, alternative programming on the weekends for Vassar students, so it was an easy match to make.”

As BNI expands its programming and collabo­rative projects, the student group has become in­creasingly involved with the VSA. Joshi noted, “We now have a representative in the Health and Well­ness Committee, and we have received financial and vocal support from various generous support­ers.” But significant challenges remain to be re­solved. Zhuo elaborated, “Budget has always been a major obstacle for us. As one of our members put it, it’s really hard to do alternative programming with limited people and money.”

In addition, BNI has had miscommunications with VSA Finance regarding the status of funds alloted to the student group. Remaining positive, Kohei suggested, “There doesn’t seem to be much communication between the VSA and different organizations, except for times when someone is in trouble, or someone needs money. Having ex­perienced the VSA and being a part of an org now, I hope to maintain a strong relationship with the VSA and work together to make some much need­ed change on our campus.”

Urging student government to continue to sup­port alternative programming, event attendee Pi­etro Geraci ’18 explained, “BNI and organizations like it are absolutely on the right path and abso­lutely deserve support, and I think the VSA Senate should consider lending its support to them.”

Jewett and Raymond House Advisor Michael Drucker, who helped BNI get started, agreed that alternative programming is beneficial to students who feel uncomfortable with the party scene. “It is so important for programming like Big Night to exist because, quite simply, people need things to do!” he wrote in an emailed statement. “There are and always have been sober students having fun on the weekends here, but I’ve heard from many that it can feel lonely because heavy drinking seems like the campus norm even when in reality that’s only a section of our student population.”

In fact, perceptions of exclusion among stu­dents can be aggravated by commonly-held beliefs exaggerating the importance of alcohol use to so­cial life. Balawadjer argued, “Surveys suggest that students overestimate the number of their peers who drink as well as the quantity and frequency taken. The college experience is what you decide to make it; don’t let others or faulty perceptions dictate what your college experience ought to be!” Interested students and faculty members can help advance BNI’s vision for a more inclusive campus community by contributing ideas to the group and lending support. Joshi concluded, “Our strengths lie in the commitment and creativity of our mem­bers. Thus, if anyone else thinks that Vassar can use a stronger substance-free community, joining our team and directly contributing to the realiza­tion of our goal is the best way to help.”