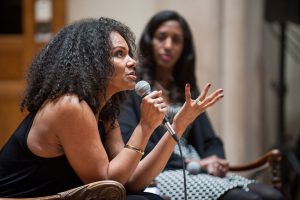 From the Great White Way to the White House, Audra McDonald has a number of impressive performance spaces in her repertoire, and as of this past Sunday, Feb. 5, she will be able to add Skinner Hall to this list. The Broadway superstar performed in front of a sold-out recital hall full of eager Vassar students and faculty as part of the culminating event of Modfest 2017 entitled “Raising Voices: An Afternoon with Audra McDonald.”

The performance began with a brief introduction from Associate Professor and Chair of Drama Shona Tucker, followed by an approximately 45-minute concert comprised of some of McDonald’s personal favorites, chosen by the soprano herself. Consisting primarily of show tunes, the set list included classic, celebrated ballads such as “Maybe This Time” from “Cabaret” and “Climb Ev’ry Mountain” from “The Sound of Music,” a song that McDonald performed during the live telecast of the well-loved musical.

She also included some less mainstream hits such as “The Glamorous Life” from “A Little Night Music” and “Stars and the Moon” from “Songs for a New World.”

Ever an advocate for new, original work, McDonald also featured “I’ll Be Here” from “Ordinary Days,” a song she also included in her fifth studio album “Go Back Home.” In the name of showcasing her classical training, McDonald included two pieces from Gabriel Kahane’s “Craigslistlieder,” a humorous take on traditional German lieder.

Interwoven throughout the concert, Audra talked briefly about her selections with a focus on motherhood and her performance history. She also took time to interact with the small audience, exchanging light-hearted discourse with a man about the Super Bowl, asking what hair products two people sporting natural hair used and leading the audience in a brief sing-along of “I Could Have Danced All Night” from “My Fair Lady.”

The concert portion of the night was then followed by a short conversation with Professor of Film Mia Mask, who has written a book about prominent female African American television and movie stars entitled, “Divas on Screen: Black Women in American Film.” Talking points included McDonald’s philosophy of never being reduced by race or gender, how she manages to balance being a performer, wife and mother, her path from Julliard to Broadway and her political activism.

“She is a rare talent. What’s more, we haven’t had a world-class performer of color on the Skinner stage in a very long time,” Mask observed.

She continues, “The Music Department admits as much. Kudos to Christine Howlett and Tom Pacio for rebranding Modfest and inviting Ms. McDonald. She is the jewel in the festival crown.”

When planning the final concert for Modfest, co-directors Interdisciplinary Arts Coordinator Tom Pacio and Associate Professor of Music and Director of Choral Activities Christine Howlett immediately thought of McDonald as someone who truly exemplified the theme of “Raising Voices.” Not only a talented artist, she also encapsulated the unwavering strength and resistance that the present moment necessitates.

“As an accomplished actor and singer, she has the voice of an artist,” Pacio explained. “She also has this other voice she has used in the last couple years to talk about different things happening in the world, both political and otherwise. This idea of the discipline that goes into being a singer as well as the discipline that goes into being a voice that people listen to in every way has an interesting duality about it that really captures what Modfest is about.”

Besides activism, Audra McDonald has become an unstoppable force within the performance world, refusing to be limited. In 2014, her role as Billie Holiday in “Lady Day at Emerson’s Bar & Grill” netted her the Tony for Best Lead Actress in a Play, and, in doing so, she made history. Not only did she become the first person to win in all four performance categories, but she also broke the record for the most ever Tony Awards won by a performer. In her tearful acceptance speech, McDonald made special thanks to “all the shoulders of the strong and brave and courageous women” who helped pave her way.

Much like the legacies of the great African American women McDonald mentioned in her acceptance speech, such as Lena Horne and Ruby Dee, McDonald’s unrelenting work ethic, practiced technique and versatility as a performer has forever marked her as a trailblazer for both singers and actors alike of all genders and ethnicities.

Besides her sheer talent, McDonald is known for defying racial typecasting by portraying traditionally white roles in major Broadway productions such as Carrie Pipperidge in the 1996 revival of “Carousel” and Lizzie Curry in the 2007 revival of “110 in the Shade.” For McDonald, there is always a desire to push more, learn more and teach more, a notion that Modfest co-directors wanted to have showcased throughout the event.

“We have a lot of music that happens in this building and it is nice to see someone who is female, who is a woman of color, who is out there doing amazing work, really forging her own path, be in this space,” praised Howlett. She continued, “I think that is incredibly important for Vassar students to see.”

A force to be reckoned with, McDonald and her illustrious career speaks to defying what is expected, the goals people aspire to reach both within and outside of their careers and the hard work it takes to get there. No doubt, through her example, more voices will continue to grow louder and stronger every day.

“I want students to be inspired and entertained by her prowess as a musician, but what I want most of all is for them to be inspired and encouraged to identify the voices in themselves and look to the Vassar community for vehicles for these voices,” Pacio declared emphatically. “That is really what we have been trying to achieve with Modfest as a whole, as well as this event. I want students to have their voices heard.”