After brief introductions, Associate Director of Alumnae/i Outreach and Partnerships Jannette Swanson posed a series of questions to the panel. The first involved their time at Vassar, and the panelists explained events throughout their college experience that shaped their career paths. After graduating with a bachelor’s degree in psychology, Brandon Davis ’11 went into the pharmaceutical industry. Though he no longer uses much of what he learned in his psychology classes, he does apply what he learned to reading psychology articles and analyzing papers. Still, he chose psychology because he wanted to help people and do meaningful work, and feels that his current job allows him to do this.

As a recent graduate and neuroscience major, Ziwen Wang ’17 described being drawn to research after an intensive Vassar course in which her professor worked with each student individually to demonstrate the scientific procedures. She completed her thesis project with Professor Hadley Bergstrom and, after a lot of troubleshooting, they kept having to rebuild. In all of those experiences, she explained to the attendees, people kept telling her that this was different from real research. She applied for her current position as a research assistant at Columbia University to find out how.

When she graduated, Emily Feuss ’12 wasn’t completely sure what she wanted to do with her

chemistry degree. Now a color matcher for Benjamin Moore Paints, she said that she needed to step away from academics to figure out what she wanted.

Swanson then offered the panelists the opportunity to describe the implications, both positive and negative, that come with the decision to go to graduate school and conduct research instead of entering into the workforce.

Senior Staff Scientist at Regeneron Pharmaceuticals Dr. Joanna Hansen ’01 began by discussing the downsides of having a PhD and being a postdoctoral researcher. When she was an undergraduate student at Vassar, Dr. Hansen said she felt as if she needed a PhD and post-doc. After years of hard work, she found having a PhD and being a post-doc to be limiting in some ways because of the required pay for a PhD that does not exist for master’s candidates. She explained that many of the people she has worked with only have a master’s degree and stated, “It’s easier to get a master’s-level job in pharmaceuticals than a PhD level.” 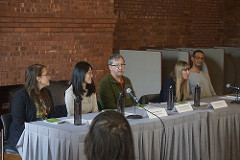 Senior Research Chemist at Albany Molecular Research Dr. Charles Heap ’91 described the industry side of his job. One of the biggest differences between academia and industry work, he said, is that there are always deadlines in industry. Heap stated, “In industry they want to see progress every week or every few weeks.” As a scientist working in an industrial sector, he explained, one of the most important things is to demonstrate your value to your managers, who will often hold degrees in economics rather than in a scientific field.

Swanson then asked what she described as one of her favorite panel questions, about the upsides and downsides of the panelists’ jobs, asking, “What makes you tick and what ticks you off?”

Feuss began, explaining that her job as a color-matcher allows her to have a 40-hour work week and that, unlike many of those with PhDs, she doesn’t have to think about work at home. A downside, she explained, is the fact that working with color and paint in general is quite driven by marketing. She noted that the difficulties that arise in explaining issues in color marketing concepts that revolve around science to people who don’t have academic experience in the sciences. Despite working in different fields, the other panelists mentioned that they struggle with this issue as well. Dr. Hansen also described the difficult transition from her position as a benchwork scientist to a more administrative job full of meetings and presentations rather than the experimentation she had enjoyed in school and during her post-doc. After Davis and Wang echoed the drawbacks of such administrative duties, Wang wrapped up her response on a more positive note, stating about her research work, “[It] allows me to explore an area that is different from what I did at Vassar.”

Before opening up to questions from current students, the panelists offered advice on how to get involved in their fields. Davis spoke to the importance of research experience, and added that leadership positions of any kind help a resume stand out. He also offered himself as a resource, telling students, “Don’t be afraid to reach out to us; we’re always happy to get on the phone for three minutes, to look at a cover letter.” Dr. Hansen attested to the importance of a post-doc fellowship, and brought up an interview experience in which it was recommended that she get one. Dr. Heap described his field as less demanding of a postdoc, and admitted, “If I was to do it all over again, I would leave it at a Master’s. PhD limits you.” Wang told students not to overlook the importance of communication when entering a STEM field, and stated, “A scientist does not live in a vacuum.”

Following the Q&A session, Swanson opened the floor to questions from the audience.