One of the most wonderful qualities about art is its ability to express complexity. Whether we are using it to convey an unfamiliar idea, combine multiple concepts or deconstruct ways of thinking, art can highlight a world of emotions, tensions and intricacies unlike anything else. Two seniors, Vasundhara Mathur and Sixing Xu, relied on art to explore the multidimensional ideas that comprised their senior theses. Centering the discussion on art, both students talked about everything from how they envisioned their thesis, their creative processes and how others influenced their artistry.

“I started with this poem because I just wanted to let go of the idea of the thesis from the very beginning,” Mathur commented on the opening page of her work. “It just came out of me and it has bits and pieces of conversations I’ve had with my professors. Every little word comes from somewhere and from other poems and texts we’ve read…It some ways this is a combination of the language I’ve learned in all my classes.”

Mathur’s thesis is an ethereal compilation of ideas she’s gleaned from her classes, conversations she’s had with artists and her professors, and art itself in many forms. From poems she has written, to journal entries, to photos of people and art, Mathur uses her graceful words and imagery to combine philosophical and political ideas about everything from time and artistic spaces, to empathy and telepathy. On paper, her thesis is vibrant. Colors pop from virtually each page and words are formatted in unconventional ways. Unique and eccentric, her project uses art just as much as it discusses the ideas that art conveys.

Explaining the basis for her work, Mathur said, “I feel like a lot of my education has been about thinking about what words mean instead of putting meaning to words. And then it’s about forming relationships with [these words] and then they percolate and circulate constantly.” She elaborated on her senior thesis, “This is [a culmination of] all these concepts I came up with more than anything else. [They] have to do with what specific terms and words allow for my imagination.”

Last year, Mathur attended a lecture by Chilean muralist Francisco Letelier, who talked about how he used murals to express the experience of living in exile. This particularly caught Mathur’s attention, as she has been painting murals since she was a young girl. She commented, “Murals always seem like borderless ideas that don’t separate art from where it is and who’s around it…and [Letelier] really emphasized this and then he read a poem that really stuck with me.”

At the end of the talk, she reached out to Letelier who suggested she apply for the Burnam fellowship, which would allow her to get to know the international artists at the 18th Street Arts Center in Los Angeles. There, Mathur studied the ways artists think as well as what it means to inhabit a space of art. In executing her research, Mathur fostered deep connections with two artists who changed her life: Indian multimedia artist Mithu Sen and Egyptian visual artist Sherin Guirguis. She also read the book “Philippines” by Hélène Cixous, which highly influenced her thinking on her thesis. 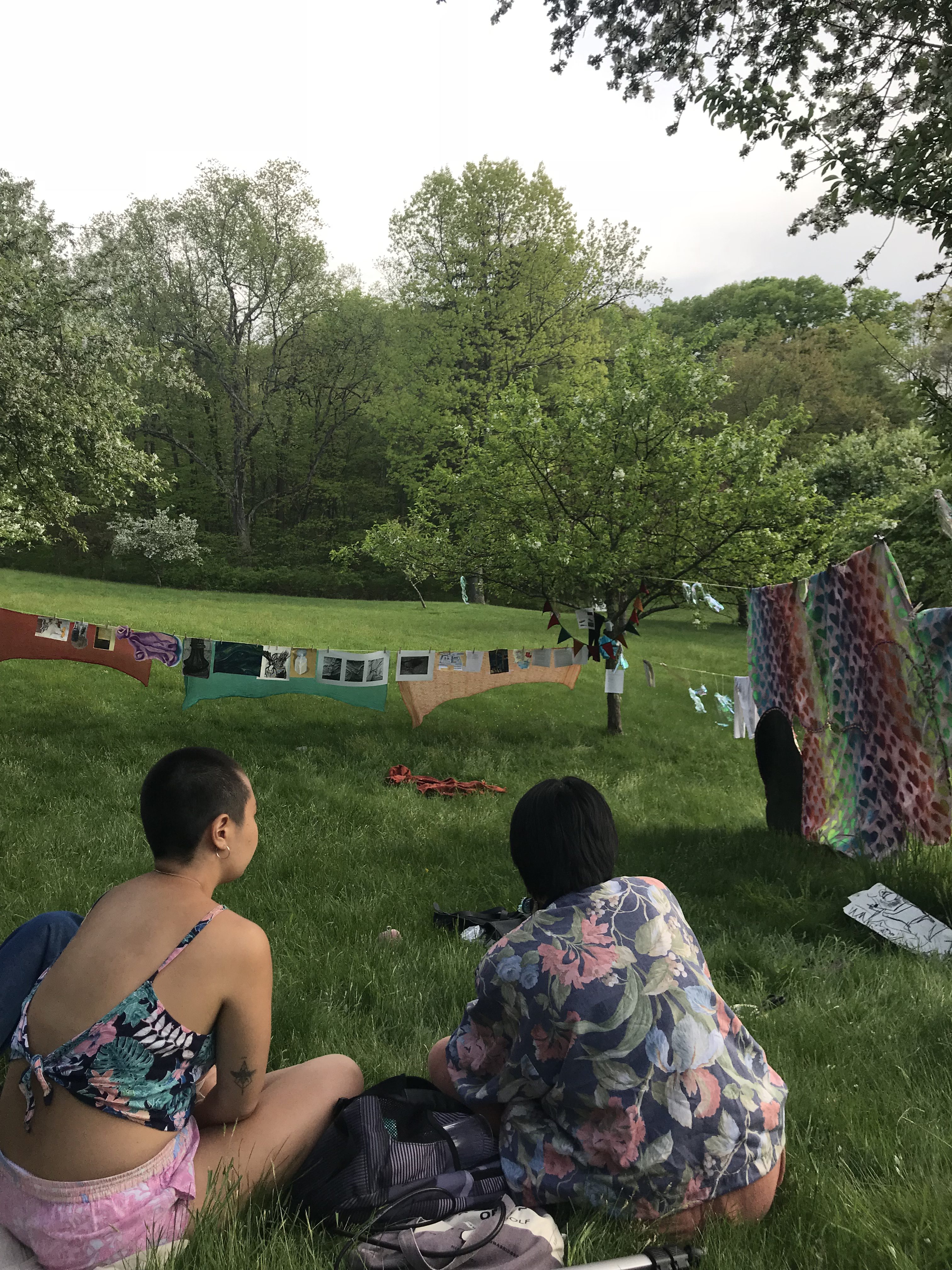 Mathur continued to explain her work and how it was inspired by the two artists she met at her fellowship, “Cixous…talks about the idea of coming back to things that constitute us or that have changed us. So she talks about always coming back to this person, always thinking about love, always coming back to the other. And so my thesis in some ways thinks about art in this way through my interaction with these two particular artists, Mithu Sen and Sherin Guirguis, who I had very intense relationships with at 18th Street. And [my thesis] basically talks about their work and their imagination and what they allowed me to do.”

In addition to her written collection of interviews, poems, and short essays, Mathur’s project included an artistic event called “Skylights: A Collaborative Art Event” that took place on May 11 on the Orchard at Sunset Lake. To build the atmosphere of a creative, welcoming and  introspective celebration, Mathur crafted an open space on the grass and lined trees with poems, drawings and paintings she or her friends made. The event featured music, poetry and dance performances by Mathur and her friends. The space even included a mural that was created by multiple people. One of Mathur’s friends, Ellis Thompson ’20, played her saxophone at the gathering. Thompson commented on the space Mathur created and her experience performing: “Playing in the orchard felt idyllic. Even with sheet music flying around in the wind, the beautiful scenery made the music sound even better.” The inclusive and collaborative aspect of Mathur’s project was an essential idea in her work and crucial in the artistic space she created. Mathur commented, “My thesis is so much about being able to share [art] with other people and care for other people … I just wanted to see all my friends in one space not worrying about what has been asked of them.”

Another person who influenced Mathur’s thinking on her thesis was Xu. In fact, Xu’s own work was uniquely about art. Combining both a written essay and a video installation in her thesis, she investigated how we think about digital images and conceptualize art museums.

Describing how she began her thesis, Xu commented, “When I started this project, I was thinking of writing about art museums and technology and how they interact and influence each other.”

She explained that her project took on a more detailed angle after much reflection: “After researching and thinking, I arrived at this point where I am writing not broadly about technology, but about this one product of technology which is the digital image. [The digital image] is not limited. It can be a jpeg file, a video file, a text file, or audio file—anything that has an appearance or a likeness that can be consumed by you, either by vision or hearing or things like that. And [in my thesis] I talk a lot about the potential I see with the digital image.”

Xu linked this idea of the multidimensionality of the digital image with the complex dimensions of the museum. She explained, “When we think about art museums, we see it as a place with a certain type of ideology and a certain type of history because through its historical construction only certain works are shown. So I’m thinking about this idea of visibility and invisibility within the museum which coincides with this idea of the image which has two sides. One side is more visible to us and the other side is information and data and is more readable to computers, but is still important. This potential of having this invisibility rendered visible was what interested me [about the two spaces].”

Ultimately, both students featured art in different ways to convey important social and artistic complexities embedded in our world—Mathur experimenting with a culmination of writing, photography, painting and performance to consider concepts such as time, space and empathy and Xu employing both an analytical component and video art to explore how we envision the art museum. Xu ended her interview on a broader note, commenting about artistic thinking: “It is a way of artists to deconstruct or think about things that we are familiar with in less familiar or entirely unfamiliar ways. It’s a way of making the invisible normalized or…beautiful…if that is what art is.”