Where do you call home?

My home is Newton, MA.

What else do you do on campus?

Other than academics, I’m a member of the women’s volleyball team and the women’s frisbee team. I also dabble in the art of various intramural sports.

Who was your favorite athlete growing up?

Growing up I played soccer until I was in high school, so my favorite athlete was Mia Hamm.

What’s your favorite building on campus, and why?

If you take any premade sammy for lunch, or I guess whenever, really, and you press it,

it makes it so much better.

If you could only eat one food for the rest of your life, which would you pick?

It would probably be chicken, because I could prepare it in a bunch of different ways, I guess. Love a chicken.

My celebrity crush is Bradley Cooper, of course.

What’s been your most listened to artist or album in the last couple weeks?

My most listened to artist in the last couple weeks is probably Frank Ocean. I guess I’m just always listening to Frank Ocean.

Who’s one person from history you’d like to have dinner with, and why?

Probably Robin Williams. I know he was an actor and a comedian, but I do think he made history, and I think he’d be so fun to talk to.

What’s one thing about you that people would be surprised to know?

I actually never had had a plum until this past summer. So yeah, it’s pretty wild.

I have no hot takes these days. My friend Emmett O’Malley—shoutout—told me this the other day: They’re actually making a “Toy Story 4” that’s said to be coming out next summer, so that’s interesting.

What’s been your favorite memory from playing volleyball at Vassar?

My favorite memory would have to be sitting in the Deece last season with a bunch of teammates and finding out we got a bid to the NCAA Tournament. We were watching on the computer and we saw Vassar on the bracket and we started screaming and the whole Deece went completely silent. It was awesome.

I chose Vassar for the chance to play volleyball and frisbee, the two sports I’m passionate about. And for the smaller class sizes compared to larger colleges and universities.

What do you like most about the being a student-athlete at VC?

I just love playing a team sport in general, building that community with your team and being able to use those relationships built through playing a sport together to help you in any aspect of your life.

First off, frisbee has running, so that requires me to be a different kind of in shape. Also I think frisbee is more wild and new for me; I’ve only been playing for three years so I think it’s still that stage where I’m obsessed with it and want to get better, like all the time. 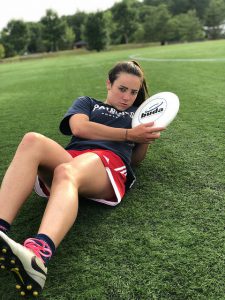 Frisbee here is just another whole level of Vassar that I appreciate so much. The people I’ve met through the frisbee team are just incredibly cool and fun and kind. It’s not a cult, I swear.

What’s one piece of advice for first-years?

Use your NROs early. Like, right now. I think these are the classes where you’ll most want to use them.