In February 2019, Vassar’s Board of Trustees approved the construction of Vassar’s Institute for the Liberal Arts and an Inn (the “Inn and Institute” or I/I), a two-story conference center with an attached three-story hotel containing 50 rooms and a restaurant, funded primarily by an anonymous donation. Last summer, the College committed to constructing the I/I carbon neutral on site, meaning the finished project would not draw energy from fossil fuels, but would combine geothermal, solar-thermal, solar-photovoltaic and renewable electricity. The College originally anticipated that construction partners would break ground this summer, with an intended opening date of July 2022. But plans are in flux, as the project has not yet secured approval from the Town of Poughkeepsie.

The College has appealed the Administrator’s decision at several Zoning Board of Appeals (ZBA) meetings since then, and recently proposed an amendment to the Town of Poughkeepsie zoning code that would permit the full I/I project’s construction within the Institutional Zone. As Dean of Strategic Planning and Academic Resources Marianne Begemann described in a June 18 Planning Board meeting, the changes would:

Such a Zoning amendment would not just apply to Vassar and its projects, but all institutionally zoned districts. Ian MacDonald, an attorney with Mackey, Butts & Wise, LLP representing the Arlington Neighborhood Association (ANA), a group of property owners who reside adjacent to the site of the project, stated that such an amendment may have a substantial environmental impact, due to its permitting similar construction projects at neighboring institutions of higher education. MacDonald implored the Board to acquire a draft environmental impact statement. “This proposed text amendment is very broad,” Claire Pulver, also an attorney with Mackey, Butts & Wise, LLP representing the ANA, affirmed. “The way this proposed text amendment is written would apply to Marist, or even Dutchess Community College. So the impacts of having a similar conference center or an inn and hotel at both of those campuses really need to be considered.”

Concerns over the proposed location extend beyond the legal realm, and into the daily lives of many Town residents. Some Vassar faculty members have opposed the project’s location because it requires the demolition of the historic Williams House, an affordable faculty housing unit built in 1922 to house women faculty that currently contains 21 apartment units and is eligible for the state historic registry, to construct a parking lot. According to the College, the municipality requested having both parking and the building on the same site to limit the crossing of Raymond Avenue, and the number of parking spaces is governed by Town code. The overarching Town Plan, which was last updated in 2007, states that new projects should take advantage of existing structures of historical significance. Faculty members who live in the house have testified that the house is usable. The projected costs for repairing the house are close to $20 million, and an alternative analysis report completed by the Hudson Valley Cultural Resource Consultants in May of 2019 concluded the house is not viable for adaptive reuse, meaning the existing structure cannot be repurposed. The process of demolition is set to begin in mid-July. Per a statement from the Office of the President of Vassar College, all residents of Williams will have vacated by mid-August.

Others have stated that the project infringes on the public lawn space, which serves as a park-like setting for town locals in an area where there are few such open spaces. The I/I’s geothermal units—which are central in the building’s sustainable heating system—would require drilling into the lawn. Additionally, a completed project would reduce the existing 1.37 acres of lawn to .86 acres, a change ANA member Julie Szabo described in the June 18 public hearing as a violation of the aesthetics. “The green space…is now essentially going to serve as a decorative border to the hotel,” she said. The College stated that it will restore the lawn after installing the geothermal system, install new benches and amenities, endow maintenance of the lawn as an amenity for the community, provide a $2,500 annual stipend to the Town of Poughkeepsie Department of Parks and Recreation to support marketing activities, and sign a maintenance agreement to preserve the green space for the next 20 years, the lifespan of the equipment supporting the geothermal wells.

Vassar Vice President of Finance Bryan Swarthout described that the siting reflects one of the missions of the project: to create a conduit between Vassar and the community. Other criteria for selecting the site include proximity to the Arlington Business improvement district, the campus and the alumni house. As Swarthout noted, development of this site was contemplated in the Town Plan, which also identifies Arlington Town Center as appropriate for mixed residential and commercial development to preserve greenspaces elsewhere, and states: “Areas surrounding large institutions such as St. Francis Hospital and Vassar, Marist, and Dutchess Community colleges, should be considered economic development opportunity areas for both related new business development and convenient, walkable service centers for the campus population and the substantial number of yearly visitors.” Many town residents posit that increasing local visitation would increase traffic congestion in the local Arlington area, which the 2007 Plan describes as “fragmented by automobile-oriented site plans” and highways.

Still, others involved in the local community—whether residents who work at Vassar or contractors who will work on the I/I specifically—are pushing to move forward with the project, as it may provide economic recovery from the effects of the ongoing pandemic. A handful of professors in attendance of the June 18 Planning Board meeting, many of whom reside locally, noted the difficulty of hosting conferences and the impact such limitations have on academic careers, including loss of grants. Jake Miller ’20 observed that limited large spaces inhibit student organizations from hosting events, some of which bring students from other schools into the community. Joshua Brownridge ’20 explained the difficulty of finding somewhere for students’ parents to stay when they visit the campus, particularly for parents who do not have a car. Scott Prichard, a lifelong resident of Dutchess county and the construction superintendent for Consigli construction, the firm constructing the project, implored the Board to expedite their decision, noting the numerous construction employees who have been furloughed or laid off due to projects being suspended temporarily or permanently under the pandemic. “Why build now? Why not now, when it’s probably the best thing you can do to support the community in its recovery from the recent pandemic?” he inquired during the June public hearing. “These are all jobs that we need and we need now.” Still others in the business district, including President/CEO of Dutchess Tourism Mary Kay Vrba, spoke in favor of the I/I at its proposed site due to the increased economic activity it may bring to local businesses.

Some local residents noted that the benefits of the I/I to those involved in construction would not necessarily be lost if a new site was negotiated. Residents have floated constructing on Collegeview Ave or the Josselyn Tennis Courts, both of which would preserve the lawn and neither of which necessitate placing a parking lot where Williams currently stands, but raise similar traffic concerns to the original site. The College has opposed the tennis court location in part due to the proximity to student dormitories, as the Inn would be directly behind Josselyn and Jewett Houses. As Swarthout explained, “We just think it’s an inappropriate, incompatible juxtaposition of those projects.” Residents bordering the proposed site contend that it is also inappropriate for the project to be in proximity to their children.

Another proposal places the I/I on the Vassar farm, a 415 acre ecological preserve located around a half mile south of the campus center along Hooker Ave. The preserve is often used for faculty and student research, and is open to community use as “one of the few remaining green spaces in Poughkeepsie.” Swarthout explained that the farm is not optimal due to its distance from the Alumnae/i House and Arlington, which he stated may reduce the chance of visitors participating in the business district. “Siting this near Arlington so it can hopefully drive additional business for the Arlington business improvement district was important,” he described. Director of Sustainability at Vassar Micah Kenfield stated that building on the preserve would pose significant environmental harm, as well as restrict access for those who use bus lines or who otherwise lack access to private transportation. The Town Plan also states that the Vassar farm is among greenspace sections that are “highly valued as community recreation and open space uses and should be preserved.”

The College has modified the project throughout the approval process, redesigning the sewer system for greater efficiency, developing a traffic and parking plan and withdrawing a request for a P.I.L.O.T. The architecture of the building itself, which many residents did not feel fit with the community character of surrounding buildings, also underwent alterations, such as changing the dormers from flat to peaked and adding a ledge around the building to mirror the timbering of Alumnae House. 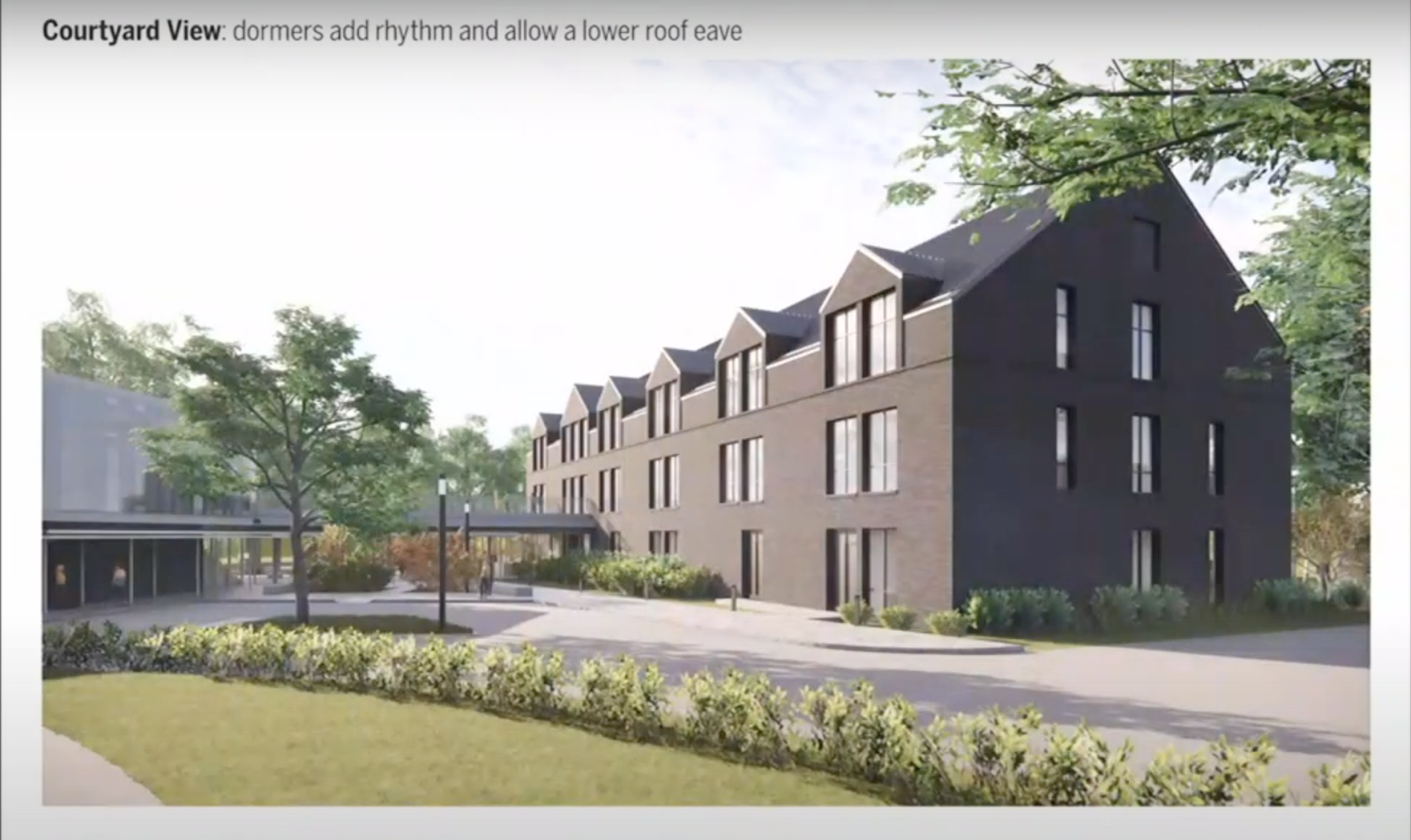 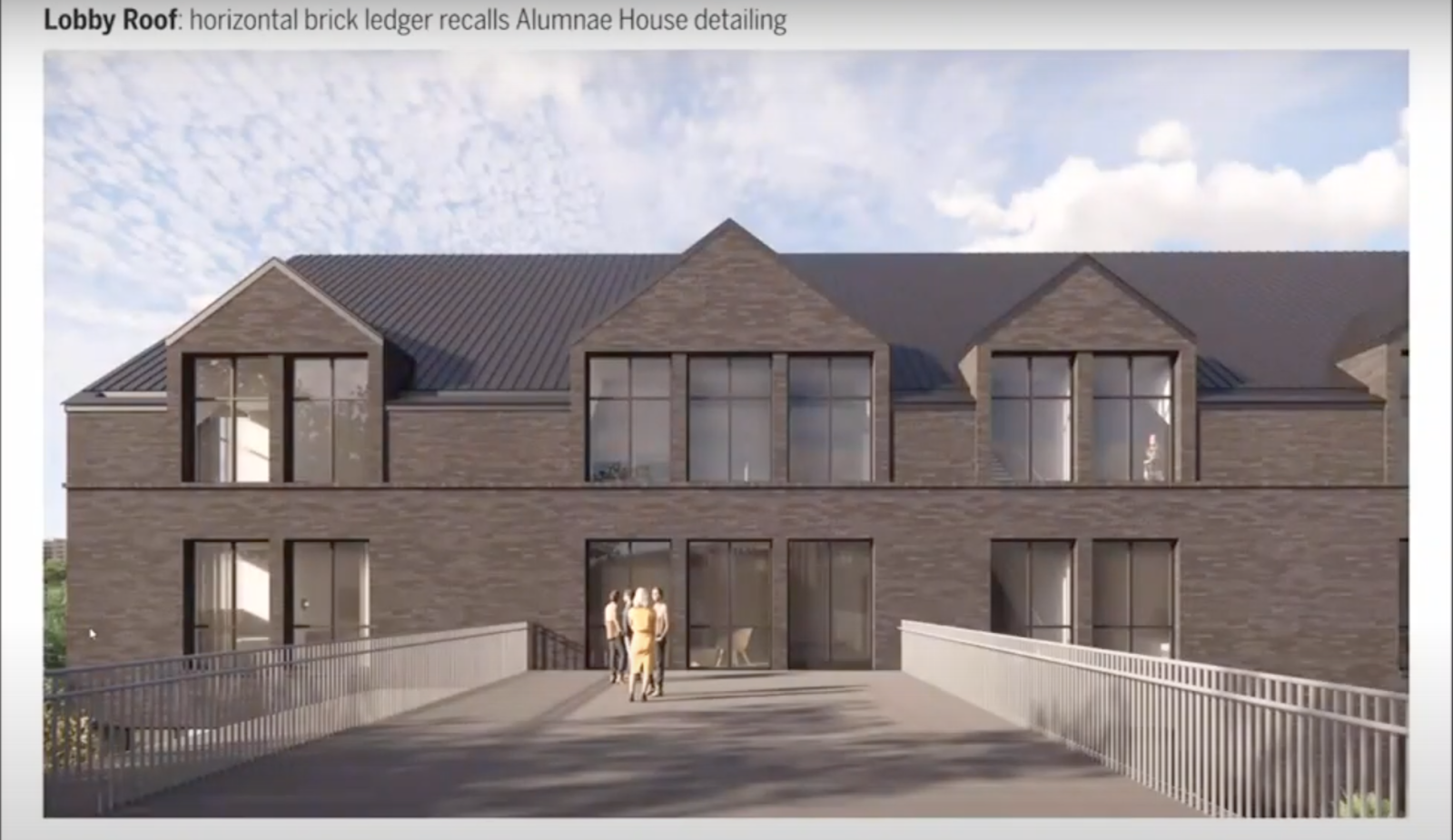 Members of the Planning Board proposed the College coordinate a site visit. President Bradley described the project to the Planning Board, Vassar faculty, local businesspeople and residents in attendance to the June meeting as “a key piece of our future together.” For now, the Planning Board has deferred further action on the site plan and proposed zoning amendments, and further discussion has been adjourned to August 20, 2020.