For several students on campus, sourdough bread is the perfect food for the pandemic, requiring only flour, water and patience. And as the Spring 2021 semester starts, a few students are sharing their food with the Vassar community. Two students, Cole Crile ’22 and Weipeng Xie ’21, are hoping to spread their love of baking through their sourdough creations, as well as other baked goods.

While Crile isn’t active on social media, I first came across his bread thanks to his housemate Pedro Augusto Lima ’21, who showcased the fluffy loaves on Facebook. When asked when he started baking, Crile explained, “I’m originally from the Midwest, so I started with a lot of classic Midwestern foods. I made a lot of a lot of bread and rolls and biscuits and cookies … I find [that] a lot of the time it’s just easier to bake because I have the ingredients always lying around. With cooking, […] I need to get this specific thing for this dish that I’m going to make, and I’m usually not great at planning things when I go to the store.” Indeed, Lima’s photographs showcase how much Crile has perfected his loaves—they are plump and crisp on the outside, soft and bubbly on the inside. 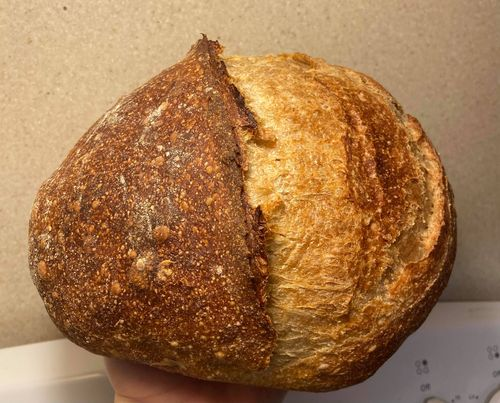 Three days after Lima’s post, Xie also posted sourdough-related content on Facebook. Instead of bread, however, Xie offered jars of sourdough starters that he had named Prince Edward and Varg Ratimir. As Xie isn’t housemates with Crile, he didn’t want to start competition between him and the latter. “I figured that sourdough starter can be used in so many different ways,” said Xie. “[The beauty] about sourdough starter is [that it’s] basically a leavening agent—[a] yeast that you can incorporate into any other baked goods. So you can use sourdough starter [for] pancakes, waffles, muffins, cupcakes and cake.” Xie himself enjoys experimenting with different cooking styles, whether it’s baking Japanese cheesecake, cooking paella or frying tteokbokki (Korean rice cakes). Out of this desire to experiment rose his interest in sourdough. “Because we have more time [staying at home in the pandemic], and we’re around the kitchen a little bit more, I got into sourdough,” Xie said. What makes sourdough unique, according to the two bakers, is how the taste improves over time. “One of the things I love about sourdough is you can fit it into your schedule,” Crile said. “If you are at work late one day it doesn’t matter; your bread can sit in the fridge for 12 hours, 18 hours, 24 hours—it’s not gonna hurt it and it’s just going to enhance the flavor because the bacteria [is] fermenting the dough in the fridge.”

Crile typically begins baking with an autolyse, which is mixing warm water with flour. Next he lets the bread sit for an hour, which allows the flour to absorb the water and become a smoother mixture. After this, he adds his starter (which is prepared by forming a bacteria culture in water and flour and allowing it to ferment) with salt. He stretches and folds the dough every 30 minutes for about two and a half hours. Later, Crile allows the dough to bulk rise for another three to four hours before letting it sit overnight in the fridge. While this is his usual process, Crile emphasized that certain factors, such as the temperature of the kitchen or type of flour, can influence the baking process. “You can look at plenty of different recipes, videos [and] articles [on sourdough] and they’re all going to have some variation that’s unique to that recipe,” Crile said. “And it’s not necessarily that any of those variations is better or worse than the other. It’s a science [and] also an art of learning how the dough should feel and how each stage works.”

As he discussed bread-baking, Xie found himself reminiscing about the Vassar food community. “[I’m the president of] an organization called Vassar Generations,” Xie told me, “and we usually go off campus every weekend to the Vassar-Warner Home, which is a senior home nearby in the community … We have collaborated with Challah for Hunger [a nationwide student organization dedicated to fighting hunger] many times, where they would bake [breads], and we would come together and bring the bread to [Vassar-Warner Home], and share the food that we’ve made and prepared. Unfortunately, this year has been very restrictive. So unfortunately, we cannot share our joy of being next to the senior home and sharing the food [with them].” Xie would like to give his homemade goods to those in need, but admitted he hasn’t yet thought of a means of distributing them out of campus.

Crile has also considered sharing his food in the Vassar community, but lamented that there haven’t been many opportunities given the current restrictions. Still, he enjoys seeing how food has brought Vassar students together during the pandemic. “Everybody is more or less stuck on campus,” said Crile. “So there’s no outside sources near as much for all of these things. And so people start making [food] themselves [since] you can’t get it anywhere else [outside of campus]. And it’s great to see how many people are doing more baking and cooking through this.” He added that moving into the townhouses this year has made cooking easier for him. “It makes everything so much more accessible, because it’s really hard to [make food] in a dorm. And I think that’s kind of the break off in the food community. Unless it’s done [in org events] that have other spaces available, then it gets really hard to do for a lot of students.”

For those who are looking to bake during their time at Vassar, Crile and Xie offer three words of advice. First: Baking is not a huge operation. “You don’t really need super fancy equipment to start,” Xie said. Second: Expect to mess up. “The first thing you make is probably not going to be good,” Crile explained. “I’ve made plenty of things that I’ve had to throw straight in the trash, because it’s just inevitable. But it takes practice, and you’ll get there eventually. And it’s a lot of just getting the feel for it and learning some of the principles. It’s not all as complicated as it seems.” He even advises beginners to keep a journal to note what works and what doesn’t while baking, sharing, “You’re always gonna find new ways, learn new ways to do things [whenever] you’re in the kitchen.”

Lastly: connection. Xie emphasized the importance of bridging the gap between baker and audience. “I’m always trying to ask for constructive criticism and be receptive,” said Xie. “Sometimes the people who are making food have a biased taste [and] are sometimes blind to some of the faults that you might have when you’re baking. So [you should] really ask for the people who are eating or trying your food their honest opinion and be receptive to that.”

But no matter what it takes, the byproduct of baking is always worth it. “Some of the best feel-good moments I’ve had in [my] house is making something and giving it to people,” Crile remarked. “I’d never think a silent room could sound so good.” The two bakers continue to make food on campus, awaiting the day they can finally share it with the Vassar community.