“What if I went viral?” We’ve all thought about it. Whether you post on Snapchat every time you eat or show up once a year for the obligatory Instagram birthday shout out, social media has created a platform where anyone can become famous—sometimes for no reason. In fact, Vassar College is home to one of social media’s latest stars.

This past week I got the chance to sit down with Violet Witchel ’22, the food content creator behind the popular account @violetcooks.

With over 1.5 million followers and 56 million likes, @violetcooks is undoubtedly at the top of the food chain when it comes to TikTok fame at Vassar. She posts easy-to-follow recipes and other mouthwatering food-related content that leaves viewers craving more. Like many TikTok users, Witchel didn’t expect fame when she first created her account last year during the COVID-19 pandemic: “Originally I started my account for fun. I posted a few cooking videos and none of them blew up, and I didn’t really go into it expecting anything.”

As the nation hunkered down inside during the spring and summer months of 2020, many found themselves with time to pursue creative projects such as reading, crocheting or renovating their homes. That’s when Witchel decided to create a TikTok account dedicated to her passion: food. 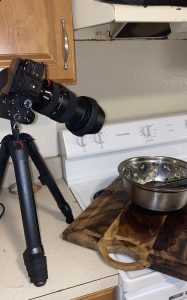 Just a few weeks later, one of Witchel’s recipes went viral. “I made a taco video and that got 300,000 [likes] and I thought I was like hot shit,” Witchel laughed. From there, she continued to make videos on a more regular basis. As the pandemic raged on and people sought comfort in social media, her following continued to grow. “I just kept doing it for fun, and then around 20 or 30,000 followers I started getting advertisers and companies sending me PR and I was like, ‘Oh shit! This is kinda real,’” she shared.

One month after starting her account, Witchel reached 100,000 followers. Nearly a year later, she reached one million.

A key component of Witchel’s cooking videos is how aesthetically pleasing her content is. Many of Witchel’s followers might never suspect that she starts her cooking in a crowded TH. For those wondering how Witchel is able to make such visually appealing content in a less than camera-ready living space, she also utilizes her backyard. “I live in the TH’s (Town Houses) and the kitchen is definitely rough,” she revealed. “Sometimes I bring the cutting board outside and do most of the cooking there, and if there’s heat I use this big stove griddle outside because it looks much better on camera,” she explained.

While Witchel has loved to cook for as long as she can remember, she never thought that her passion would turn into a potential career. “I was actually going to go to college for food science and then I decided not to,” she commented. Instead, Witchel decided to pursue an economics major here at Vassar, which comes in handy since she manages her account and brand deals.

Although Witchel had a manager for around six months, recently she decided to take full control. This has given her the freedom and flexibility she sought once she started creating her content. “If I have finals, I can take a break from ads for a month. If I had a manager I couldn’t do that,” she added.

Companies often send Witchel products to use in recipe videos. Most often, she is sent gluten-free bread or dairy-free milks. However, she also features apps, lunch boxes and other food-related items in her videos for brands. The items that Witchel promotes are affordable and accessible, which caters to her audience whose ages range from 16-24.

Witchel’s TikTok account has become a reliable source of income and allows her to transform her love for cooking into a full-time career. She emphasized keeping how much money she earns a secret. “People talk about it but if you’re transparent about your pricing you just get ripped to shreds, and people are so weird about it, like ‘How are you making that much money,” Witchel said. Aside from ads and PR, Witchel’s Tik Tok journey has set her up for success. She has plans to work as an intern for a healthy food start up called The Naked Market this summer and is being considered as the sole content creator for an upcoming “big brand,” which she has chosen to keep secret for now, following her graduation from Vassar this spring. 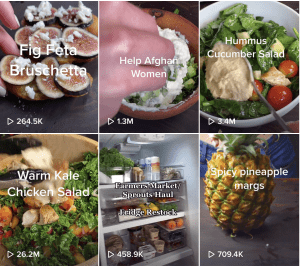 Even though Witchel came upon fame by chance, she quickly learned that growing an audience and creating high quality content is a lot of work, especially as a full-time student. From start to finish, the process of creating a TikTok takes four to five hours and  includes finding the recipe and ingredients, filming and editing. “It’s kind of a long process,” she admitted.

Initially, Witchel struggled to find a balance between TikTok, school and extracurriculars. “Last year I was on the swim team, and doing TikTok, and had a really hard course load, and that was pretty hard,” she explained. After quitting the swim team this year and taking an easier course load, Witchel has finally found the perfect balance.

Like any content creator, sometimes Witchel finds herself struggling to come up with new ideas. “Sometimes I do get creatively blocked—I’m just like, ‘I don’t wanna cook, I don’t wanna edit this video for two hours,’” she explained. Throughout this whirlwind process, Witchel has learned that it’s ok to take a day off.

While Witchel’s Tik Tok success has given her financial and job security all before graduation, there have been many other positives to her newfound fame. “I get a lot of people with eating disorders messaging me [saying] ‘This helped me so much to recover…and a lot of people that are financially unstable who like my recipes because they help save money—those are both really cool messages to get,” Witchel shared. “Then there’s just people who didn’t previously have a good relationship with food or are uncomfortable in the kitchen saying, this is super easy! Which is awesome,” Witchel added.

As someone who went from taking cooking videos on her iPhone during the pandemic to a student cultivating a life-changing career and loyal audience, Violet Witchel truly is a force to be reckoned with.