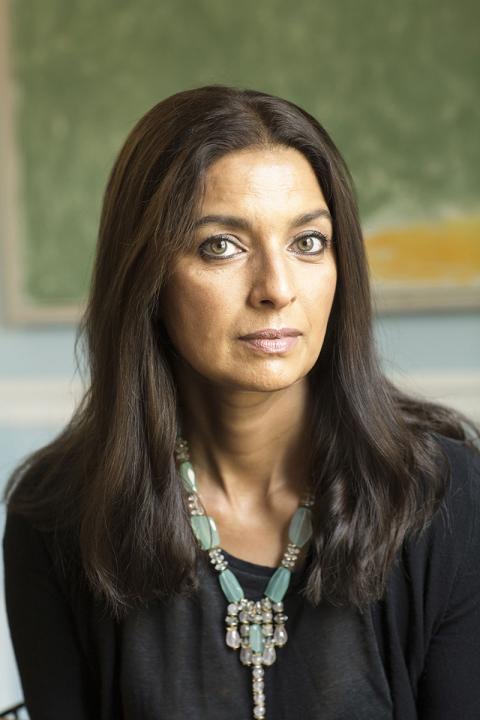 On the chilly night of Monday Nov. 8, the Villard Room bustled with excited chatter as students, professors and Vassar community members alike mingled and cherished the warmth of the room. Rows upon rows of colorful plastic chairs faced an elevated pair of armchairs positioned at the front, empty and awaiting their anticipated inhabitants for the night.

When the door at the front of the room opened and this year’s speaker for the Alex Krieger Memorial Lecture finally stepped into view, the whole room immediately burst into energetic applause. Award-winning novelist and writer Jhumpa Lahiri walked over and sat across from Professor of English Amitava Kumar.

After the audience had settled into a silence of anticipation, Dean of the College Carlos Alamo kickstarted the event with a brief introduction of the two speakers. He proudly listed some of Lahiri’s achievements: her Pulitzer Prize-winning collection of short stories “Interpreter of Maladies”; her first novel, “The Namesake,” which later became a film; the No. 1 New York Times bestseller “Unaccustomed Earth”; the prestigious National Humanities Medal; and many other successful works and awards. Lahiri continues to engage with prose as a Professor of Creative Writing at Princeton University.

Lahiri joins the vast selection of accomplished writers who have visited the Vassar campus to deliver the Alex Krieger lecture. Although the lecture series was initially created with the intent of bringing in writers who incorporate humor into their works, the college has expanded its criteria. “In recent years, we have broadened the scope to include writers who are current and impactful beyond humor being a strict requirement. This year’s writer was invited due to her vast contribution to American literature,” Associate Dean of the College for Campus Activities Dennis Macheska commented in an email correspondence.

“Our hope is that Jhumpa Lahiri’s journey, and specifically her recent language learning experience, will resonate with Vassar students,” Macheska expressed. “Those passionate about reading, those aspiring to write, and those who have worked through the process of learning a new language; should all find something of interest with this year’s speaker.”

After the introductions to the event, Kumar and Lahiri jumped right into conversation, reminiscing on the latter’s first experience visiting Vassar’s campus, when she joined the community as the 2004 Writer-in-Residence. She painted a picture, simple yet all too familiar to anyone who has visited Vassar during the wintertime: “It was February, and it was cold and snowy. The whole campus was covered in snow.”

The discussion weaved through a variety of different topics: Lahiri’s published works; identity and culture; books and authors that Lahiri had drawn inspiration from and eventually met in person. Kumar invited a few outside sources into the conversation, including a 2013 New York Times interview in which Lahiri further discussed her work. He read aloud her answer to the question of which writer, dead or alive, Lahiri would meet if she had the chance: “The idea of meeting writers of the books I’ve read doesn’t interest me. That is to say, I wouldn’t go out of my way. If the book is alive to me, if the sentences speak to me, that’s enough.” She continued, “A reader’s relationship is with the book, with the words, not with the person who created it. I don’t want the author to explain anything to me or to interfere” (New York Times, 2013).

The topic of writing pervaded the majority of the conversation. Kumar often asked Lahiri to read from her published work, drawing attention to Lahiri’s writing style and the smooth flow of her sentences.

“The sentences that remain are the ones that I can bear to live with, and the other ones I can’t, and I toss out, I throw away,” Lahiri explained. “So, I get to the point where I can sort of bear it, not necessarily like it or anything, just bear it and feel that it’s doing the job it needs to do. And I let it be.”

The discussion eventually delved into Lahiri’s relationship with the Italian language. At one point, Kumar asked Lahiri to read a passage from her widely-known book on the topic of learning a new language, “In Other Words,” which she originally published in Italian. She read the passage in Italian, an excerpt that detailed her struggles learning prepositions in the language. Right afterwards, Lahiri paraphrased for those who didn’t know Italian: “I’m saying that prepositions are one of the stickiest bits of learning a new language, because they operate according to a very particular logic, and there are a lot of exceptions to the rule, and it’s just hard. It’s hard for me to feel confident in getting the prepositions right.”

Lahiri talked about this challenge, this insecurity, with a gentle but direct honesty, a tone that persisted throughout the entirety of the event, even as she discussed other topics beyond writing and Italian. For example, earlier in the event, when talking about a short story she had written that revolved around the image of tea, Lahiri elaborated on a specific experience that she had in college: “I remember feeling strange, and strangely powerful because I had all of these impressions and memories and had all of these experiences that I never talked about to anybody,” Lahiri reminisced. “It was really when I got to college that I was aware of that whole other set of experiences that [had] been lying dormant.”

The conversational tone of the talk prevailed throughout the night. Lahiri and Kumar spoke to each other like old acquaintances, helping the event embody the structure and sentiment of an ongoing dialogue, an actively changing, evolving, growing conversation that kept branching out into new topics and points of discussion. Laughter often rippled throughout the room whenever either of the speakers slipped in a joke. When she read excerpts from her published work, the audience members embraced an attentive silence, clinging on to every word that Lahiri shared. Even though community members engaged with the lecture from the beginning, the event culminated in a question-and-answer segment that directly brought the audience into the conversation.

One student asked for advice for aspiring writers trying to find their own voice. Lahiri responded, “I think there’s no escaping the phase of which you are imitating.” She deconstructed the misconceptions regarding writerly voices and imitation, asserting that emulating the works of past artists and writers opens the door for new writers to learn the foundations of their craft. She continued, “It’s only by doing that that you, I think, eventually arrive at this thing called ‘your own voice,’ which I include in scare quotes because it is kind of a myth. Because we’re all made from voices that have come before us.”

As the discussion eventually came to a close, and the final thundering applause faded and audience members filed out of the Villard Room, the influence of Lahiri’s presence lingered in the energetic chatter of the crowd, in the stacks of signed copies of Lahiri’s most recent novel, “Whereabouts,” that audience members bought. Most importantly, her influence will remain in each student, professor, faculty member or community member in attendance, from aspiring writers and language learners to avid readers and those just eager to learn more about Lahiri’s journey.