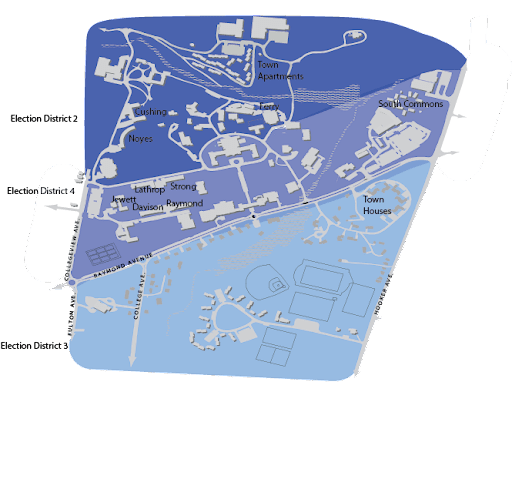 Split between three legislative districts, Vassar students vote in two locations for three legislators, which has, in part, lowered county voter turnout and gerrymandered one of the highest concentrations of Democratic voters in the county. But following the Dutchess County Independent Redistricting Commission’s (IRC) controversial disbandment in June 2021, a new IRC will be announced by Feb. 15. The first independent redrawing of county legislature lines could lead to the incorporation of Vassar into one district for the 2023 election cycle.

In regards to reduced turnout rates this past November, Professor of History and Minority Leader Rebecca Edwards, a former Dutchess County Legislator, said, “It’s hard under those circumstances—when you’ve got three different legislators representing different parts of the campus—to help educate people about what the legislature does, why it’s important [and] why people should come out to vote in local elections.” She added, “Persuading people that local elections matter is a larger issue and also getting people the information they need to feel like they can be informed voters. A lot of people just don’t vote in local elections, particularly Democrats, particularly younger voters [and] more mobile voters.”

These are some of the challenges that Democracy Matters Co-President Sara Lawler ’23 works against with help from Vassar Votes through student-voter turnout efforts. The split campus further complicates the voting process, with Lawler receiving hundreds of emails with voting questions every year related to re-registering after moving or determining the correct polling location. According to Lawler, incorporating Vassar into one legislative district would make the efforts of Democracy Matters significantly easier, with the ability to streamline information, direct voters to a singular polling location and educate students about a single legislator who would represent all students and increase voter turnout.

“The concerns of the students may be magnified if their votes were unified versus being a smaller component in each of three districts,” Office of Community Engaged Learning Assistant Director and Chief Organizer of Vassar Votes Jean Hinkley said. “If countywide redistricting resulted in an easier process to register and to vote, democracy would be improved.”

Regardless, Vassar’s gerrymandered campus has provided a historical electoral advantage to Democrats. The most recent redistricting for the 2010 census was not independent, which, at the time, allowed the Democrat-majority legislature to make adjustments to the commission’s maps and in the process creating Vassar’s gerrymandered campus. However, partisan gerrymandering was outlawed in New York through a 2014 voter referendum, ruling that district maps could not be drawn to benefit a political party or candidate and when possible, the IRC is required to draw lines around communities of interest, like Vassar, having similar interests that are not related to political parties or candidates.

Approved by local voters in a 2020 ballot measure, Dutchess County’s IRC of seven members will independently redistrict 25 legislative districts. The Democratic majority had made a previous IRC effort in 2009, right before the 2010 census redistricting, but the effort was replaced by the following Republican administration with a Reapportionment Steering Commission to help the legislature draw the map themselves.

The current IRC is detached from the Legislature with the county Board of Elections only able to make minor technical adjustments once the Legislature approves district lines. The committee is non-partisan in its redistricting process to earn public trust.

It is this non-partisan manner that was contested by Chief Assistant County Attorney Christian R. Cullen in July 2021, leading to the commission’s disbandment by the Legislature across partisan lines.

Democrat-appointed Commission Chair Richard Keller-Coffey was found to be on the Webutuck School Board. Per the IRC’s rules, elected officials are not permitted to serve on the commission within three years of their electoral service, as Cullen argued in a memo ruling the IRC void. Cullen also cited that Keller-Coffey’s ineligibility could lead to the redrawn districts being challenged in court and make Keller-Coffey’s joint appointment of three members of the commission invalid—and thus render the entire IRC invalid. The 10 democratic legislators, including Edwards, opposed this and staged a walkout.

In an article by The Highlands Current, Edwards commented, “[I]n the very extensive debate in the United States around legislative gerrymandering… I have not seen any commentary about the nefarious work of school board members in getting in the way of fair drawing of legislative districts.”

Five members of the now-disbanded commission have sued Dutchess County with the Dutchess County Citizen Volunteers for this decision questioning Cullen’s authority, calling for only Keller-Coffey to have been replaced, and emphasizing the partisan power grab of the Republican majority Legislature on the independent citizen’s commission. The suit has since been dismissed. Since then, the Dutchess County IRC has accepted new applications from the public and appointed four commissioners who will jointly appoint an additional three by Feb. 15.

“Gerrymandering is one of the most tangible and existential threats to democracy because there’s so much power. A state can control how [its] representatives go. Gerrymandering has one of the greatest impacts aside from voting rights issues in skewing Congress, generally more Republican-leaning Congress,” Lawler said.

In New York State, however, the failure of the state’s IRC to come to a consensus across party lines transferred redistricting powers back to the Democratic supermajority state legislature. The county IRC, however, is incentivized to come to a consensus or risk disbandment. Congressional Republicans have criticized the transfer as the state district map drawn can potentially gain three seats from Republicans, further raising partisan tensions.

“There’s a real profound need for federal intervention to insist on fair rules everywhere,” Edwards said. “What’s far more worrisome even than the gerrymandering is the threat to voting rights, and I think that is coloring Democrats’ view of the situation because you’ve got large swathes of the United States where the Republican Party is busy trying to dismantle voting rights and block people’s access. In that broader context, I think it’s very hard for Democrats not to try to just protect whatever advantage they may have to protect voting rights.”

Edwards says these proposed federal measures, similar to the Voting Rights Act, to increase voting fairness have been vocalized by members of the congressional delegation such as Senate Majority Leader Chuck Schumer. Lawler, too, supports federal regulation, likening the scenario Democrats are faced with to a rock and a hard place, either drawing partial lines or remaining non-partisan at the risk of losing house seats to Republicans.

“Gerrymandering is never okay, but if all Republican states are gerrymandering, even those democratically leaning states and those with Democratic state legislatures are not going to want to draw independent commissions because they could lose so many seats in the house on a national level,” Lawler said.

Gerrymandered campus or not, Vassar Votes and Democracy Matters continue their efforts to engage and educate students in local politics in a non-partisan manner. Democracy Matters plans on attending legislature meetings to voice any upcoming concerns as they did before the pandemic. Vassar Votes continues to allow students to register locally while also updating them with changing deadlines and requirements for voting in their home state with the TurboVote.

“Part of the reason that Dutchess County politics aren’t active and not necessarily going the way Vassar students would want them to be is people don’t pay enough attention to these local issues. [Local politics] are the most feasible kind of politics for you to make a difference in and a lot of change comes from the ground up–so don’t discredit what you can do at your local level,” Lawler said.