At around 9:15 p.m. on March 15 at Barclays Center in Brooklyn, New York, a crowd of almost 10,000 eagerly awaited what was presumably going to be a dazzling and high-spirited concert. However, before Tame Impala’s front (and only) man, Kevin Parker, took the stage, a video played over the jumbotron, telling the audience that we were not at a concert, but rather a time warp. As the video gradually slowed, simultaneously repeating and echoing through the arena, I easily forgot that I was at a performance. This psychedelic start had the entire crowd rapt with attention, and Parker hadn’t even taken the stage yet.

This was the theme of Tame Impala’s “The Slow Rush” tour, both the name of the band’s most recent album and the intended atmosphere that Parker intended to create at each of his shows. As likewise symbolized by the 20-foot-tall “Rushium” prescription bottle displayed outside the venue, audience members were meant to understand that this was more than a musical performance. This was not an event that held typical constraints of social interaction, but instead an experience of both the body and mind. And so, we were as prepared as we could be to take part in how the next two hours or so would unfold.

When Parker did take stage, he began with the opening track from “The Slow Rush”: “One More Year.” With each successive song, intricate sets and light shows would emerge and dazzle across the stage, corresponding to the music they were accompanying. These vibrant, dynamic visuals characterized the entire show and were beautiful to watch, not only being standout pieces in their own right, but elevating the experience of listening to the songs along with them. On the popular track “Borderline,” the stage swelled with warm purples and yellows, perfectly encapsulating the nostalgic feel of a song about someone closing in on finding their true self. Images of Parker’s face awash with these tones are displayed on the stage throughout, as we both hear and see the uncertainty of the song’s message. In contrast, the loud, in-your-face guitar riff in “Elephant” is accompanied with bright, flashing blues and reds that go on and off along with the beat. In songs with more variation in tempo and feel, such as “Apocalypse Dreams,” Parker maintains lights constantly flashing and moving throughout the crowd during its more upbeat, fast-paced parts, a dynamism which settles into a grander but more contained show on the stage during the song’s half-time breaks. Overall, the visuals that Parker utilized thoroughly enhanced the experience, and ensured that Tame Impala fans and others alike had a strong sense and understanding of each song.

Working through the set list, Tame Impala played a mix of new songs, with fan favorites and classics that cemented the band’s popularity and widespread appeal. This resulted in extremely engaging and inventive transitions between songs. One of the best was between the new “Glimmer” and the classic anthemic “Eventually.” The former, from Tame Impala’s more recent release, is a laid-back, almost tropical-sounding song, whose upbeat synths encourage relaxation. Directly following this, however, was the iconic, extended feedback that signals the beginning of the latter, whose guitar chords rang loud enough to blow the roof off. This switching of styles kept the audience simultaneously singing along in the moment while also building anticipation for the next track each time. 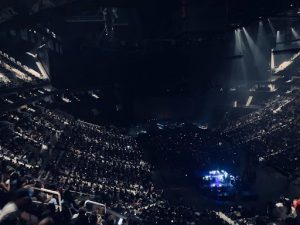 Sometimes, Parker would break the string of music by calling out to the crowd, whether it be to encourage people to “go as crazy as possible” before “Elephant,” or kindly ensure that those in the standing section took care of one another prior to “Let it Happen.” The audience reciprocated Parker’s desire to make sure everyone was having a good time by singing along to his songs with fervor. During “Feels like We Only Go Backwards,” the crowd belted the titular lines with real, unadulterated passion. It was moments like these, a sentiment which Parker himself echoed, in which we were reminded that we were deprived of experiences like this for two years, and we were all so grateful to simply get to take part in something like this again.

This enlivened crowd engagement was perhaps only rivaled after Tame Impala’s planned setlist concluded, when resounding chants for “ENCORE” rang throughout the arena. Parker of course obliged, with the band’s exceedingly memorable smash hit “The Less I Know The Better,” whose around-four-minute runtime could have been recited by audience alone. To not include your most popular song in the original setlist was a risk surely, but it also spoke to Tame Impala’s confidence in their music, knowing that the crowd would want more than solely what was planned.

Coming into this concert being only relatively familiar with Tame Impala’s music, not only did I thoroughly enjoy hearing the songs I did know, but the lightshow and Parker’s performance of new songs opened my eyes to the sheer quality and depth of his production. Perhaps the most impressive aspect of this performance was the unity Parker was able to foster in the crowd. Regardless of familiarity, song preferences or whether you liked to stand or sit, everyone in the crowd was more than welcome to take part in the time warp and it simply couldn’t have happened without them.