Feminist activist Brenda Feigen ’66 received the Alumnae/i Association of Vassar College (AAVC) 2022 Spirit of Vassar Award for her achievements this past Thursday, Sept. 29. The Award is presented to an alumnae/i who has demonstrated extraordinary and distinguished leadership, contribution and commitment to serving a community in which they affect positive, transformative societal change, according to the Vassar website.

Feigen’s interview with President of the AAVC Monica Vachher ’77 preceded the award ceremony and took place before a live audience in Rockefeller Hall as well as for hundreds of virtual viewers through Zoom. “We learn to be visionaries at Vassar,” Feigen commented during the interview, fondly recalling her years at Vassar and the opportunities that the College offered her, including a summer internship in Washington D.C. where she worked on the 18-year-old vote amendment. Olga Latoussaki ’26 who attended the event, remarked, “She went from this Vassar bubble to becoming such an influential figure.”

Feigen graduated from Harvard Law School and began her prominent career as an attorney, working side-by-side with feminist icons such as Gloria Steinem. In their first correspondence, Feigen reached out to Steinem and asked her to testify for the Equal Rights Amendment, but Steinem only agreed after Feigen wrote the testimony for her. Feigen and Steinem later contacted all of the female journalists and authors that they knew throughout New York City, which led to the creation of the magazine Ms.—a nationwide American-feminist magazine founded in 1971. 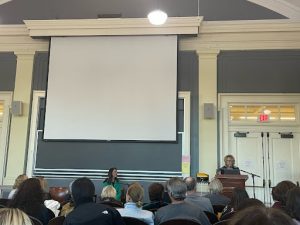 Feigen also worked closely with Supreme Court Justice Ruth Bader Ginsberg, and together they tackled major feminist movements involving Title IX, the Virginia Military Institue case (which addressed inequalities in the Virginia Military) and the American Civil Liberties Union’s Women’s Rights Project (ACLU). The audience expressed fascination at their relationship, and one student asked Feigen why Ginsburg didn’t retire under the Obama administration. Feigen responded that she wasn’t surprised that RBG retained her position as a justice until her death. She said, “[In RBG’s mind,] everything was tuned into law, into discrimination…Her whole life was the Court. There was no real Ruth without that.”

Feigen also noted that she and Ginsberg were not involved in the original 1973 ruling of Roe v. Wade, but she had much to say about its overturning: “It puts women in a position where we’re powerless again.” She claimed that the seizure of abortion rights is a call to action and fears that this is just the beginning of an era of terminated rights. When asked what students can do in response to the overturn, Feigen had three suggestions: boycott states where abortion is banned, reach out to the women and men living in Arizona and vote. Latoussakis noted, “It really provoked me to think more about the history of abortion and how much more there is to learn.” 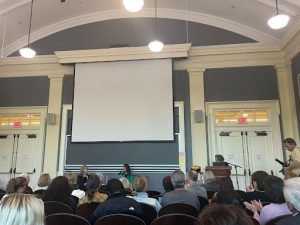 During the conversation, Feigen also introduced her own structural model of feminism. She explained that feminism is like a wheel with 12 spokes, each representing a facet of social activism including antiracism, immigration rights, disability, climate change and LGBTQ rights. “We’ve got to look at the whole picture,” she said. “You have to believe in all of these things to be a feminist.” Feigen admitted that it took her a while to grasp all of these interlocking issues, but she believes that the new generation is more aware: “The burden is on young people.”

The conversation left Vassar students and other listeners with much to contemplate. When asked why it is important for speakers such as Feigen to come to campus, Luke Jenkins ’26 responded, “It helps you connect to what happens after Vassar. People from here have done great things and you can too.” Professor and Director of the Women, Feminist and Queer Studies Department Paulina Bren, said in an email correspondence, “The fact that we have so many alums who played a part in America’s history of feminism is remarkable. Feigen was one of the key players in the second-wave Women’s Movement, and while feminism has definitely evolved since the 1960s and 1970s to encompass a variety of people and concerns, and we might not all agree on everything, as Feigen said, we can agree that women remain under attack.” She added, “I think she did a great job of painting a picture of how it was, especially at this time when so many legislators and courts are trying to turn back the clock.”

Feigen has, without a doubt, helped shift the trajectory of the Women’s Movement, and her work will be remembered for decades to come inside and outside the Vassar community.