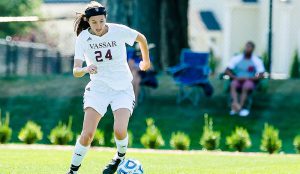 This year, the Vassar College women’s soc­cer team has had an enormous amount of success not only as a unit but also from an in­dividual perspective. The team itself current­ly sits in seventh place in the Liberty League standings; however, that number is relatively misleading. In the nine team conference, each team plays eight conference games. Currently, Vassar holds a 2-2-2 record, meaning they’ve only played six games while every other team in the league has played seven or eight. The top four teams in the conference qualify for the post season. The Brewers have set themselves up for a strong chance at the post-season tour­nament and have secured the program’s fourth consecutive winning season. The team, with its current 8-5-2 record, has a chance to reach 10 wins for the first time since 2010, two more wins would also guarantee the Brewers’ spot in the post-season.

Individually, the Brewers have been phenom­enal. Senior goalkeeper Emma Nichols had her 13th career shutout this past weekend, setting a new school record in the process. Nichols, now the outright program leader, has had seven shutouts this season alone, which ranks second on the all-time season list. She sits at second in the League in shutouts per game and third overall in saves per game. Said Coach Holton of her performance, “I think Emma this year has just taken it upon herself and really built her confidence back up and just played awesome. Bottom line she’s feeling it and that’s what we need during this stretch of the season.”

Sophomore Amanda McFarland has six as­sists this year, which is the most by a Brewer since 2011. She is fifth in the League overall. Freshman Rebecca Andrews leads the team in goals with six and points with 13 and has the most goals from a freshman since 2011. An­drews is sixth in the league in terms of shots taken as well as points. But due to missing five games with an injury, Andrews has played an average of four games less than all those above her. She is currently third overall in the league in goals per game. Finally, head coach Corey Holton reached the milestone of 50 wins as a Division III head coach, after the team’s defeat of RPI this weekend.

After their defeat of RPI the Brewers real­ized that they now control their own destiny. Nichols spoke to Vassar Athletics via video in­terview to speak further of this goal and her ex­perience at Vassar in general: “I really just take pride in being able to play up to my ability and be able to be a part of this team and a part of this program… It’s a testament to not only what I’ve been able to do but what our back four has been able to do for the past four years. I’ve got­ten to play with some really special players and it’s really just been my pleasure. We’re really excited. We know we can win these final two games. We know what we have to do. Now it’s just a matter of coming out, getting those wins and making a deep run in the playoffs. That’s what we’ve expected all season. That’s what we’re looking forward to.”

Beyond just the number of wins, the team overall has shown a lot of skill and talent this year. Earlier this month, the team faced then ranked number 21 in the country, St. Lawrence University. The Brewers managed to shutout the Saints and claim a 1-0 victory. While stats aren’t everything, this year’s team looks very impressive on the stat sheet. In 2014, the Brew­ers managed to score 18 goals total over the course of their season.

With multiple games left to play, the Brewers already have 21. What’s more, almost half of the team’s goals have been scored by first years.

Senior captain Lucy Brainerd cites this weekend’s record setting game against RPI as her favorite of the year. “Hands down RPI [was my favorite game this year]. It was so much fun to be on the field playing with 10 other girls who were all willing to give whatever it took to win that game. Every single player who stepped on the field for us gave 100% and that’s what won us the game. It’s also just really fun to win decisively against a team who beat us last year.”

For fellow senior Kamaria Coley, the game against nationally ranked St. Lawrence was the best game of the year both for personal reasons as well as for what it meant to the team. “My favorite game was against St. Lawrence be­cause we beat them when they were nationally ranked and I scored the game-winning goal. It was a great confidence booster for the rest of the season and further established us as a force within the liberty league.”

Brainerd is incredibly proud of her team thus far. “I think the depth of our roster this year is unlike it has ever been. We have so much talent from top to bottom that anyone can be put on the field and keep the level high… I think our ability to really apply changes at half-time and have amazing second halves has been impres­sive. A lot of teams can only hold on for 45 min­utes, but we’re fit enough and talented enough to take it to teams in the second half of games.”

While Brainerd has praised her team’s depth and ability to showcase many players, she has also been one of the Brewers’ mainstays this season. She sees this weekend’s game as a con­crete example of how far the team has gone. “I think we’re really starting to become a 90 minute team. Our game against RPI was proof that we’ve hit our stride and we’re ready for anything,” she said. “Individually it has been a learning process. I’m playing a new position so embracing my new role and trying to lead from a different area of the field has been interest­ing. As the captain, it has been so easy to get our freshmen acclimated. We have three other great senior leaders on this team and they have been captains every bit as much as I have, title or not.”