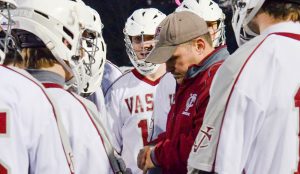 If on Saturday, Oct. 10 of this year, you took a trip down to Weinberg Field, you would have been treated to a familiar sight as the Vassar College men’s lacrosse team squared off against SUNY-Oneonta and Roger Williams University in a fall scrimmage. What you may not have known to expect was the sight of this year’s team preparing and selling refreshing cups of everyone’s favorite drink, lemonade. While the level of play was high and the Brewers showed a strong level of intensity, the real highlight of the day was the team’s partnership with the Al­ex’s Lemonade Stand Foundation (ALSF).

Senior standout T.J. Morrow, gave a little back­ground on the Alex’s Lemonade Stand Founda­tion and emphasized its importance as a cause. “Alex’s Lemonade Stand is a foundation based on raising money and awareness for childhood cancer. The cause is obvious[ly] a cause worth fighting for. Our team goal was [to raise] $600 and we already have raised close to $1000.”

ALSF has three main goals that it seeks to achieve. The first, as Morrow introduced, is to raise both money and awareness for the caus­es of childhood cancer primarily through re­search into new treatments and cures. From there, ALSF wants to create an open, inclusive community and help encourage and empower others, particularly children to get involved and help make a difference for children living with cancer. Finally, the foundation’s main goal is in­spired by the vision of their founder and creator, Alexandra “Alex” Scott: a cure for each and ev­ery child that has cancer.

Junior Eric Prezioso explained how the team connected the ALSF: “Our team got in­volved with Alex’s Lemonade Stand Founda­tion through our [Head] Coach, Marc Graham, who went to high school with Alex’s parents so this cause was more personal for him. It’s a great cause to get behind, Alex was a very brave young girl and it feels right to help carry on what she stated with [the original] Alex’s Lemonade stand, raising money to help fight sickness and disease in young children.”

Alex Scott was diagnosed as a pediatric can­cer patient just before her first birthday. Once, at the age of four, she informed her family she would be setting up a front-yard lemonade stand. The young girl had a plan, she wanted to give all the money she made to her doctors in order to help them find a cure. Scott and her older brother, Patrick, managed to make $2000 that first day. As Alex continued to battle her own cancer, she spent each and every moment she could setting up more and more lemonade stands. News began to spread and many others began setting up their own stands and donating any proceeds to the young Scott and her cause.

Morrow explained how he and his team were collecting much of their funds. “As a team we have a page on the Alex’s Lemonade website that you can find by searching on the site for Vassar men’s lacrosse. Any funds donated there will go straight to the foundation. I encourage anybody interest[ed] in donating to check out the website.”

After opening the lemonade stand in 2000 at the age of four, Alex spent another four years working and inspiring people at her lemonade stand. Unfortunately, in 2004 at the age of eight she passed away. At that point, she had raised over $1 million towards helping cure one of the diseases that had killed her. In 2005, Scott’s par­ents started the ALSF and continue the work on Alex’s goals. They were raising money and awareness for childhood cancer causes, focus­ing mainly on research into new treatments and cures and worked to encourage and empower others, particularly children, to keep making a positive difference in each other’s lives.

Overall, since 2000, ALSF has managed to raise well over $100 million. The money they raise in dues helped fund more than 500 cutting edge research programs and projects. A new travel program was created in order to ensure the families of children receiving treatment are protected, and feel safe and secure as well. The money has also gone towards the continual de­velopment and upgrading of resources to help all those everywhere that have been affected by any sort of childhood cancer.

According to Morrow, the partnership with ALSF has been the realization of a team goal dat­ing back to a year ago. “As a team, we have been trying to engage and participate in more com­munity outreach projects for a while now, so partnering with Alex’s Lemonade Stand made sense to the team as a whole.”

At their actual stand on Saturday the 10th, the team managed to raise $303 selling beverages to fans.

For Morrow, the partnership brings an im­portant piece to his team and he’s glad to see them continuing to extend beyond the field. “As a team, we strive to achieve goals that would be impossible as individuals, and these goals do not need to necessarily always be centered only on the lacrosse field. Raising money to fight child­hood cancer is a more than worthy goal.”

Prezioso agreed with Morrow and hoped to be able to continue to get more involvement all season long: “Our team plans to work with Alex’s Lemonade for the whole season with everyone on our team wearing yellow shoe lac­es every game to show our support and try to spread the word about Alex’s Lemonade to all the teams we play in hopes they will donate to the cause and make difference in a sick child’s life.”