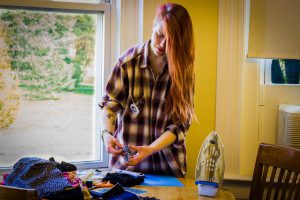 Environmental studies major Sarah King ’16 creates a quilt mapping vulnerable spaces on campus for her thesis. She enlisted the help of VC++ to create an app to track student voices and stories. Photo by Ashley Pecorelli

Most seniors at Vassar College embark on a project or thesis of some sort that inte­grates academics with something of interest to them. Environmental studies major Sarah King has done exactly that and created an extraordi­nary work that comes from the simple idea to enable communication and sharing on campus.

“I have learned that there is no division between humanity and the environment, and space is an environment just like anything else,” King said. She went on to explain that the idea for her project came from the idea of rela­tionships, and peoples’ relationships with each other and the world around them. She said, “I wanted to study the people around me and how they converse with each other so that they can learn to engage with the earth. We’re already struggling to engage with each other and the earth is responding and suffering to that strug­gle.”

King used Vassar as her canvas when imagin­ing the construction of her thesis. “My thesis is called ‘The Climate of Vulnerable Spaces.’ And I wanted to use Vassar as a case study of how conversation has developed and become more difficult over time and the campus climate at Vassar and how people talk about and are in­fluenced by it. Coming from an environmental studies point of view I thought it integrates well with climate change and it’s an interesting overlap between the two,” she said. She went on, “I’ve always wondered at what it means for students at Vassar to engage in space and have a conversation. I think this is what Vassar is missing and that what is happening on campus is that it becomes hard for some people to open up and talk to each other.”

The form that it takes is one of the most unique parts of King’s thesis. She said, “I decid­ed to condense this idea in the form of a quilt. I got inspired by Lisa Cohen’s new seminar. It’s called Art in Activism: Women in Quilting and it’s the first quilting class that’s ever been at Vassar. There has never been any talk of quilt­ing in the Arts Department but it is a major part of American history.”

King hopes to combine all of the narratives and stories she’s collected, and exhibit them on the quilt as a form of storytelling. “I hope that the quilt itself provides space for people to confront what’s going on in their lives,” King concluded.

The process of turning her idea into a real­ity involved much more technology than one would expect for a quilting project. “VC++ helped me design an app. My thesis is sup­posed to be vulnerable to what the campus says because its about the campus and how could I gauge that physical understanding of how people see our campus. So I came up with the idea that there could be a program that could gauge the campus environment and where peo­ple could put in their spaces of vulnerability. I talked to VC++ and they built the app for me and they also helped me distribute it,” King said. She went on, “However it could only go to a limited amount of people because the app isn’t part of the app store so with that data I was given one dimension of how our campus looks to a certain number of people and then I started to approach other modes of hearing and other dimensions through which people see campus.”

The production of the technology wasn’t the only thing that King had to start from scratch. She said, “I also started learning how to quilt because this seemed like a really good way of expressing the image that would provide a con­versation of experiences at Vassar that could also live on to be it’s own object that would live on.”

King’s main barrier is the lack of physical material. “I’m trying to get people to have the time and space to contribute and feel like their voice is being heard,” she said. The contribu­tions she has received around campus have gone beyond just voices as well. “At this point I don’t have enough fabric to make this possible so I use all kinds of fabric, basically anything that people give me and it should basically be clothing and fabric that represent your mo­ment of vulnerability at Vassar.”

King described her end goal, “In the end it’s going to be a full instillation if I get enough fabric where I’m going to have the map of the entire campus with all the points of vulnerabil­ity on it. The physical space will be lined with all the stories I’ve experienced while writing it and all the stories people have given me.”

One surprising fact that King has discovered is the lack of a clear trend in the data points of vulnerable places on campus. “The whole campus is covered in points. There aren’t even concentrations of vulnerability, its clearly hap­pening throughout campus and everywhere on campus and I feel like that has helped me un­derstand that sometimes students need a break from Vassar and all the stress that comes with it,” King said.

She went on, “The ultimate goal is to have a quilt, have the instillation and then hopefully have a workshop that will enable people to use the quilt as a safe space or an object of comfort and sharing.”

King hopes her thesis will have bigger im­plications. She said, “I hope it’ll make people realize that their stories are valid and this will further help them engage with other people better. I hope that by doing this I can give peo­ple the space to feel supported and then also show Vassar that the way they’ve built this in­stitution isn’t helping students and there aren’t enough structures in place that help students. That there is more that can be done.”